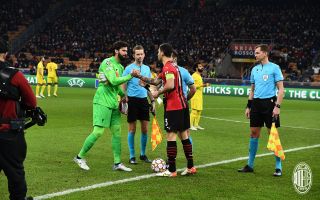 Alessio Romagnoli believes that AC Milan played a ‘good match’ but came up short in their 2-1 defeat against Liverpool at San Siro tonight.

Milan came into the game at a sold out Giuseppe Meazza hoping that they could spring a surprise by beating Liverpool and then hoping for a draw in Portugal or an Atletico Madrid win by the same or a lesser margin, which would have sent the Rossoneri through.

The captain spoke to Mediaset’s microphones after the game and revealed his belief that the Rossoneri actually put on a good performance and tried their best, but it wasn’t enough in a ‘difficult’ group.

“We knew it was difficult but we had a good match. We started the first half strong, sorry we tried our best but it was a very difficult group. Now the league remains,” he said (via MilanNews).

You’d be forgiven for wondering if Milan will ever have a fully fit squad against as two new injuries mean the forward depth has been even further depleted, with Rafael Leao and Pietro Pellegri sustaining muscle problems that will keep them out, while Olivier Giroud, Ante Rebic, Davide Calabria and Samu Castillejo are also out.

“Injuries are part of the game. Whoever played was ready. We had to collect something in previous matches but that’s how it went. We could have done better in Liverpool and with Atletico, we had to be more cynical. It wasn’t an easy group but we’ll try again next year if we deserve to qualify.”