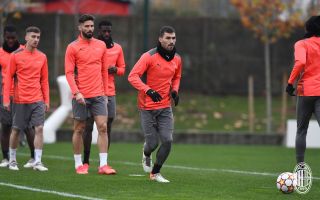 CM: Romagnoli happy to take substantial pay cut as agreement over Milan renewal is near

AC Milan and Alessio Romagnoli are moving towards extending what is an over six-year relationship together as a renewal now seems close, a report claims.

Romagnoli joined from Roma back in the summer of 2015 and he instantly established himself as one of the first names on the team sheet, even getting the captain’s armband as a reward for his consistency and his loyalty the club having renewed his contract part way through.

Now, however, his deal has just a few months left to run and he is no longer a guaranteed starter given the presence of Fikayo Tomori and Simon Kjaer. Calciomercato.com report though that the Milan management are working on a renewal with Romagnoli and the club feel they are close to an agreement for the renewal.

The player is ready to say yes to an offer of around €3.5-4m net per season, lowering his current salary by about 30%. More news is expected shortly on this front but everything suggests that a deal will be struck, as per the source.

READ MORE: Chelsea legend Terry reflects on failed Milan move – “It would have been a dream”