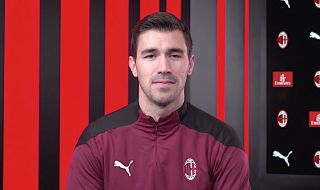 Romagnoli reflects on return from injury, defeat against Lille and the two penalties conceded

AC Milan defender Alessio Romagnoli has revealed that his recovery from injury was not as quick as planned, and reflected upon his return to action.

Romagnoli gave an interview to Milan TV as a precursor to Sunday’s visit of Hellas Verona and as a reflection of the defeat to Lille.

“We knew it was a very difficult match, they were better than us. That’s all, there is no positive streak or any other reason. They, like Verona, have a good pace, play very aggressive and fast. It will certainly be useful,” he said (via MilanNews).

On the injury he sustained: “It was quite serious, I thought I could return sooner but then the times got longer. The important thing is that it’s all over.

“I honestly want to play all the games, then it’s up to the Coach to decide. I feel ready and I feel good, it’s up to me to prove it on the pitch.”

Romagnoli has drawn criticism from some sections of supporters for giving away two penalties since his return, although both were admittedly contentious decisions.

On those incidents, he said: “They were very generous, but now it has happened and we can’t change things. Maybe one doesn’t have to give the referees a chance to whistle them.”

On team spirit: “There is a courageous and determined spirit, we need to rediscover what we missed a little yesterday. We are always ready and we work to be ready in every game. We know that they are a very difficult team [Hellas Verona] but it is up to us to prove our worth and win the game.”