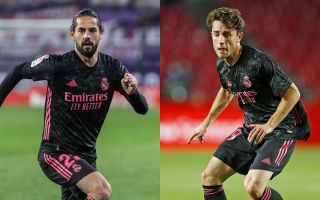 Milan have been linked with several players this summer and it’s quite understandable, seeing as Paolo Maldini and Ricky Massara want to reinforce many positions. It seems they could make some business with Real Madrid.

In addition to Brahim Diaz, who will return to the Rossoneri on loan with an option to buy, Alvaro Odriozola and Isco are also two options. As reported by Fabrizio Romano (via TransferZone), they are all ‘likely to leave’ Real Madrid this summer.

Milan want one more playmaker and Isco could be the perfect player to complement Diaz. Everything will depend on the demands of the Spanish side, though, while it seems Odriozola could be allowed to leave on loan.

The right-back is the Rossoneri’s alternative in case they can’t reach an agreement with Man Utd for Diogo Dalot. The latter spent this past season on loan with the club and did relatively well.

READ MORE – Watch: Saelemaekers ready for pre-season as he shows off new hairstyle