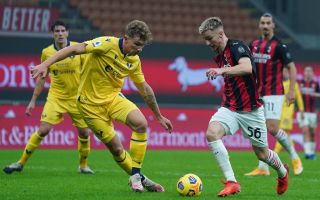 AC Milan have a concrete interest in signing central defender Matteo Lovato from Hellas Verona, according to Fabrizio Romano.

According to Romano’s latest for Calciomercato.com, Milan’s priority for the winter market is to sign a new centre-back, something which has not changed from the last few days of the summer window when they failed to get a deal over the line for a number of different targets.

Maldini and Massara will look for the right purchase in terms of value for money, and while Wesley Fofana was the priority for months he ended up going to Leicester for a fee of €29m plus bonuses, and he has impressed so far showing the Foxes could have secured a bargain but also that Milan’s scouting network is working.

Maldini, on the other hand, confirmed his admiration of Matteo Lovato, a 20-year-old centre-back who is impressing during his first season in Serie A.

“We like him a lot, but unfortunately we are not the only ones who like him”, Maldini said, which is true because Juventus are also keen and Inter shouldn’t be ruled out as they are on good terms with Hellas Verona.

Juve have been studying him for months, while Milan have entered the race in recent weeks, and they are evaluating the possibility of a January move that would be closer to €20m than €15m.