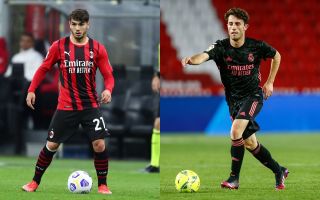 Milan have been very active on the market thus far, not just securing Mike Maignan and Fikayo Tomori, but also negotiating on many fronts. Therefore, we shouldn’t be surprised to see a few more signings soon.

The Rossoneri, in addition to looking for new players on the market, also want to lock down some of the loanees they had this past season. Brahim Diaz is one of them and according to Fabrizio Romano, Milan are nearing an agreement.

They are ‘close to completing’ the deal, which will be a loan with an option to buy at the end of the season. Real Madrid would like to include a buy-back clause in the deal but it wasn’t mentioned where Milan stand on that.

Per the reporter, the two clubs have also discussed the future of Alvaro Odriozola, who could leave the Bernabeu side this summer. He plays as a right-back and would be the deputy for Davide Calabria.

READ MORE: Inter in advanced talks as Calhanoglu will not renew with Milan – replacement is eyed