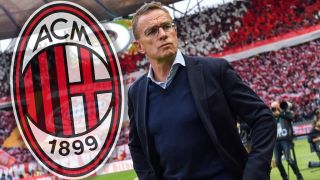 Ralf Rangnick has agreed a three-year deal to take over as manager of AC Milan ahead of next season, a report claims.

According to what Fabrizio Romano has told The Guardian, Milan have reached a deal which will see Rangnick arrive as manager for the 2020-21 season.

The 62-year-old will also hold talks with the Milan leadership to discuss what kind of a director role he will have, be it sporting or technical director.

Rangnick has been working as head of sport and development at Red Bull since the summer of 2019 and has been linked with Manchester United and Bayern Munich in the past, but he has agreed a three-year deal to begin a new adventure in Italy.