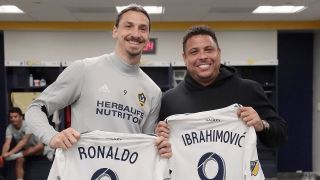 Former striker Ronaldo believes that AC Milan have a team that can compete at the top once again, praising Zlatan Ibrahimovic for his evergreen nature.

The Brazilian is widely considered one of the greatest players of all time and could have had that title outright had he not suffered with injuries in the way that he did, having become an idol for many young players of the current generation, including and especially Ibrahimovic.

Ronaldo granted an interview to La Gazzetta dello Sport and had the opportunity to talk about his former side Milan, recognising and praising the importance of last season’s second-placed finish and subsequent return to the Champions League.

“It is important that they returned to the Champions League, at their level. Football needs historic teams. Milan are competitive again in Serie A and in Europe,” he said (via MilanLive).

The former centre-forward is asked if he knows Junior Messias – the Brazilian forward taht the Rossoneri have signed from Crotone on deadline day – but he denied having much knowledge of the 30-year-old.

“Honestly no. I follow Serie A, but I have seen little in the new season, I concentrated on the players to be signed for Valladolid.”

Ronaldo also offered words of praise for Zlatan Ibrahimovic, who continues to be decisive at the age of 39 and is gearing up to return from a long stop due to a knee injury.

“Ibra is very strong, his age does not matter and does not count for him. He is a rock, he has a thirty year old’s physique, not a forty year old’s, he will guarantee the usual results because he knows how to manage himself like a super professional,” Ronaldo said.

“He came to visit me this summer at my holiday home in Ibiza. A fantastic day, we had fun, we talked a lot, about football and more. He arrived with his family, with his children.”

Ronaldo now owns Real Valladolid in Spain but still keeps an eye on Italy football, and has no doubts about the team that should win the Scudetto this season.

“For me the big favourite is still Inter. Lukaku has left, but the team remains strong and balanced, they have signed Dzeko and have completed other significant acquisitions, there are many interesting young players in the squad.”