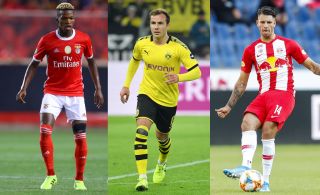 AC Milan are pushing hard to try and sign a Red Bull Salzburg star that Ralf Rangnick has asked for, while a Benfica midfielder could become a concrete target.

Radio Rossonera journalist Pietro Balzano Prota has given an update on Milan’s mercato during his latest Twitch stream (via @SightsMilan on Twitter), and discussed the situation regarding Dominik Szoboszlai.

He claims that prospective new manager Ralf Rangnick ‘loves’ Szoboszlai and he remains one of the main targets for this transfer window, with Milan currently studying how to close the deal.

On Borussia Dortmund midfielder Mario Gotze, Prota revealed that he is currently working on getting more details but did not deny the chance of the 27-year-old arriving.

Finally, the journalist claims that Benfica midfielder Florentino Luis could turn out into a concrete target this summer. His agent was in Milan in January to discuss a move and his potential purchase would be separate from the possible sale of Lucas Paqueta, with talks on hold until June/July.