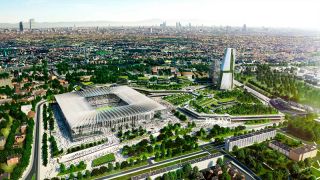 AC Milan are set to make some headway with their vision off the pitch as two important bits of news have arrived on two different fronts.

According to the latest from Radio Rossonera, there is a lot of optimism regarding the new stadium project after the go-ahead from the Superintendency regarding the partial demolition of San Siro.

The most complex issues have therefore been tackled and the dialogue with the Council is positive and constructive, with only the last steps missing to have the final green light.

Once the final ‘ok’ arrives, a pool of architects will assist Milan and Inter in the final choice between the two projects remaining in the competition – Italian firm Manica and American giants Populous. From that moment, if there were no other hitches, the new home would be up and running in a few years.

Meanwhile, CEO Ivan Gazidis is assembling a new commercial team with international influence that aims to look for partners all over the world.

The task of this team will not only be the search for a sponsor in its own right but it will also try to open new commercial paths that will bring revenue to Milan, like the relationship between Jordan and PSG.

Using the city of Milano and its reputation as the fashion capital will be key, and the report adds that they think it can be exploited in favour of new channels. The Milan brand certainly still has its charm, but this as we understand by now is no longer enough.

The fruits of the labour of Gazidis and co. will begin to be seen shortly, as next week Milan will reveal a new partnership ‘in a somewhat unconventional way’.

Meanwhile, a renewal with Emirates is also agreed and will soon come out. It is a deal with a lower base figure in comparison to the current one but with bonuses that are not difficult to reach.