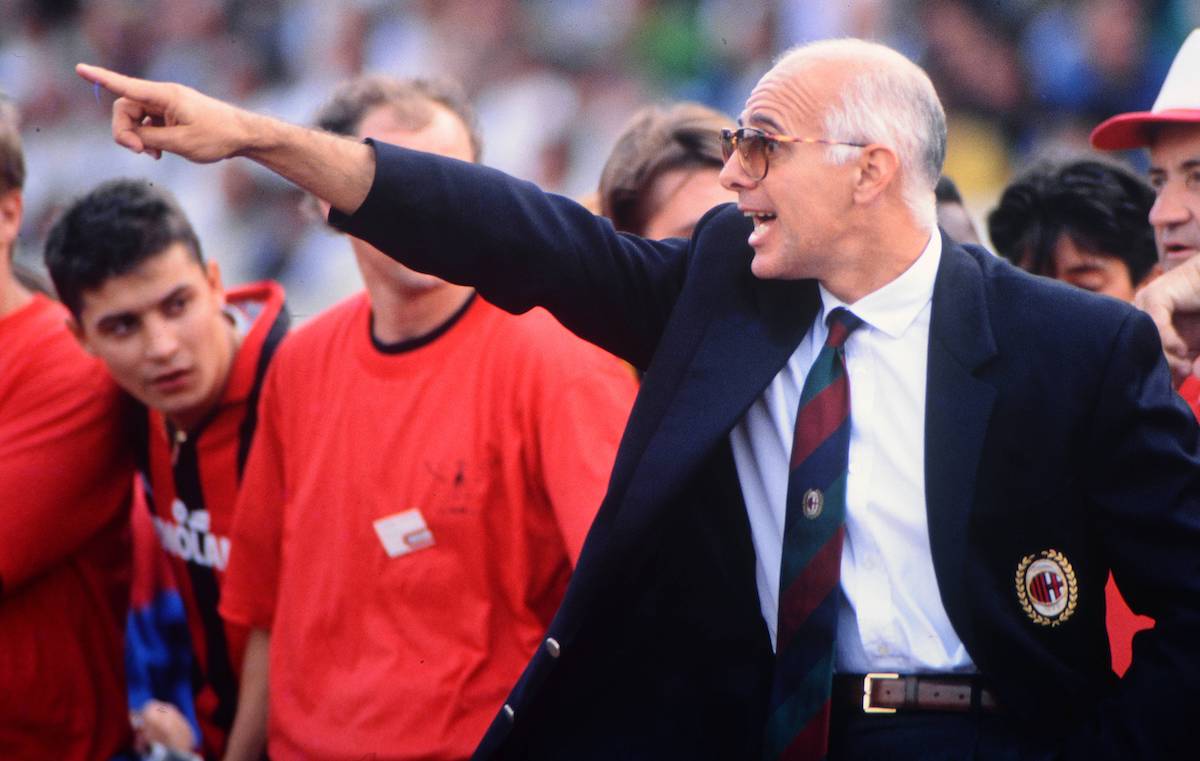 Former AC Milan boss Arrigo Sacchi has given yet more fascinating insight into his time at Milan and his decision to return, which he regrets.

Sacchi was twice manager of Milan, from 1987 to 1991 and again in the 1996-97 season, and was a part of one of the club’s most storied eras. He won the Serie A title in his debut season and then dominated European football by winning back to back European Cups in 1989 and 1990.

From 1991 to 1996 he was at the helm of the Italian national team and took them to the 1994 FIFA World Cup Final, but they lost to Brazil in the final on penalties. Sacchi is regarded as one of the greatest managers of his generation, and a revolutionary who changed football forever with his methods.

Sacchi gave an exclusive interview to the microphones of La Gazzetta dello Sport on his 75th birthday, with his comments transcribed by PianetaMilan.

On Silvio Berlusconi: “If I speak to him? Every now and then. One of the last times he said to me: ‘Arrigo, come and be the technical director at Monza. I’ll give you a villa and a butler…’. I said ‘No, thank you, President: it’s late. I’m glad you’re better’.”

On Adriano Galliani: “Covid? Adriano scared me. He told me he was asymptomatic. A few days later he wrote me that he always had a fever, then he stopped answering me. Finally, one morning, I got three yellow smileys with a heart. A great manager. A moment that binds me to him? For me four years have been a single moment.”

On Frank Rijkaard: “I remember Rijkaard sitting on the steps of the Bernabéu leading to the pitch. He was immersed in the smoke of his cigarette, very worried, a few minutes before the ‘Clásico’. He was coach of Barcelona, ​​I technical director of Real Madrid. I calmed him down. ‘Don’t worry, Frank. Win easy, we are not competitive’. Florentino Pérez listened and asked me: ‘Are you with us or with them?’. Barça won 3-0.”

On his return to Milan in the 1996-1997 season: “They thought they were treating a seriously ill patient with aspirin. The group was missing, the team spirit and therefore everything was missing. I was wrong too. I too should have done as in Parma, finding men before players.”

On the teams he admires: “Bayern Munich plays well. Manchester City too since they started pressing again. Pep Guardiola called me in November, at the most critical moment. I told him: ‘You don’t press anymore’. Pep improves the league in which he plays, because he transmits knowledge and courage. Like my Milan did.

“In fact in those years the other Italians also won in Europe. In the last ten years nobody won. Atalanta and Milan are the teams that play better. I admired Stefano Pioli already, but he had never transmitted such a strong identity to one of his teams. La Spezia, like Atalanta, makes the most systematic pressing. Nobody has eleven active men like Gian Piero Gasperini. Antonio Conte is on the right path: we see that he is struggling and struggling against some old habit.”