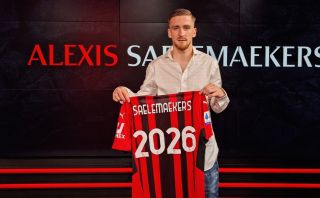 CM: Saelemaekers considered immovable by Pioli – the management made a choice in the summer

Alexis Saelemaekers is enjoying his status as an untouchable member of Stefano Pioli’s first choice starting XI at Milan, a report claims.

Calciomercato.com focuses on the Belgian and reports how Pioli loves him because he can play anywhere: as a winger or as a wing-back, even as a full-back or on the left flank. He even played as an attacking midfielder with Belgium showing he can take up a central role if needed.

Pioli has made it clear when he selects his ideal line-up: there will be Saelemaekers plus ten other players, and it will be the case against Sassuolo too. He arrived at the Rossoneri in January 2020 with a low profile, and from that day he began to work to convince everyone that he deserves to be there, and he continues to develop.

The management wanted to reward the 22-year-old with the renewal of his contract until 2026, and in the summer the club were looking for a wildcard for their attack but without ever doubting that Saelemaekers would remain the starter.

The former Anderlecht man is one of the most unpredictable players Milan have because he cuts towards the centre to free up the space for the full-back, he is direct and he often makes quick decision on the ball. Versatility, work rate and desire – Pioli is enjoying having such a useful asset.

READ MORE: Milan’s hopes and why Spurs have overtaken PSG – the latest on Kessie’s future