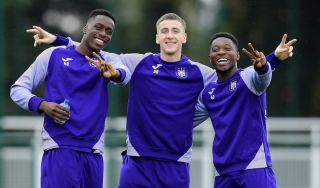 Alexis Saelemaekers has revealed that he encouraged his former Anderlecht team-mate to join him at AC Milan, and discussed his ‘worst enemy’ Romelu Lukaku.

Milan continue to be linked with a possible move for Anderlecht midfielder Albert Sambi Lokonga as a potential reinforcement to complete that department, and it seems his friends Saelemaekers is pushing for the move.

He spoke to Eleven Sports Belgium, with his words transcribed by MilanNews.

On Lukaku: “In a way he is my worst enemy. But at the same time he is one of my best friends in Milan. We can’t go out together because in Milan football is like a religion. If the fans saw us together they would get angry. Lukaku is a beautiful person and a great player.”

On Cristiano Ronaldo: “In my second or third match at Milan, he hugged me. He is one of the idols I grew up with. He didn’t know me, but he heard about my transfer to Milan and congratulated me on it. You would never think that such a player could be so humble. It’s incredible.”