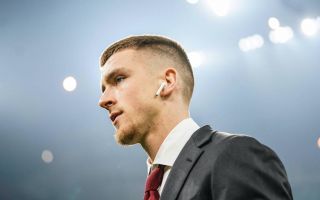 AC Milan winger Alexis Saelemaekers has revealed just what it is like to play with a character like Zlatan Ibrahimovic.

The Belgian wide man arrived at San Siro in the January transfer window on a loan deal until the end of the season, with an option to buy inserted in favour of the Rossoneri, and it was officially announced that Milan have used their option earlier in the month.

Saelemaekers spoke to Eleven Sports to look back at his spell with Milan so far alongside the Swede, with his words transcribed by MilanNews.

On Ibrahimovic: “When I arrived, I thought I would find a snooty and bad person. From outside I got that impression. It is actually very peaceful and calm,” he began.

“When he takes the field, he wants the best from everyone. When judging on the pitch, he is very kind. He is a person I really appreciate. When we are on the field together, he helps me a lot, he helps me to stay focused and always put 100% of myself.

“Observing people and pushing them to go beyond their limits is an enormous quality. I needed someone like him in my career to try and excel. I am happy to play alongside a legend like him. ”

On the national team: “In order to aspire to join the Devils [Belgian national side], you must excel in your club team.

“Obviously it is a dream I have as a child to go to the national team, but the primary objective is to do the best with the Milan shirt. Going to European would be fantastic, but it’s something that is stays in the corner of my head. I’m focused on Milan. “