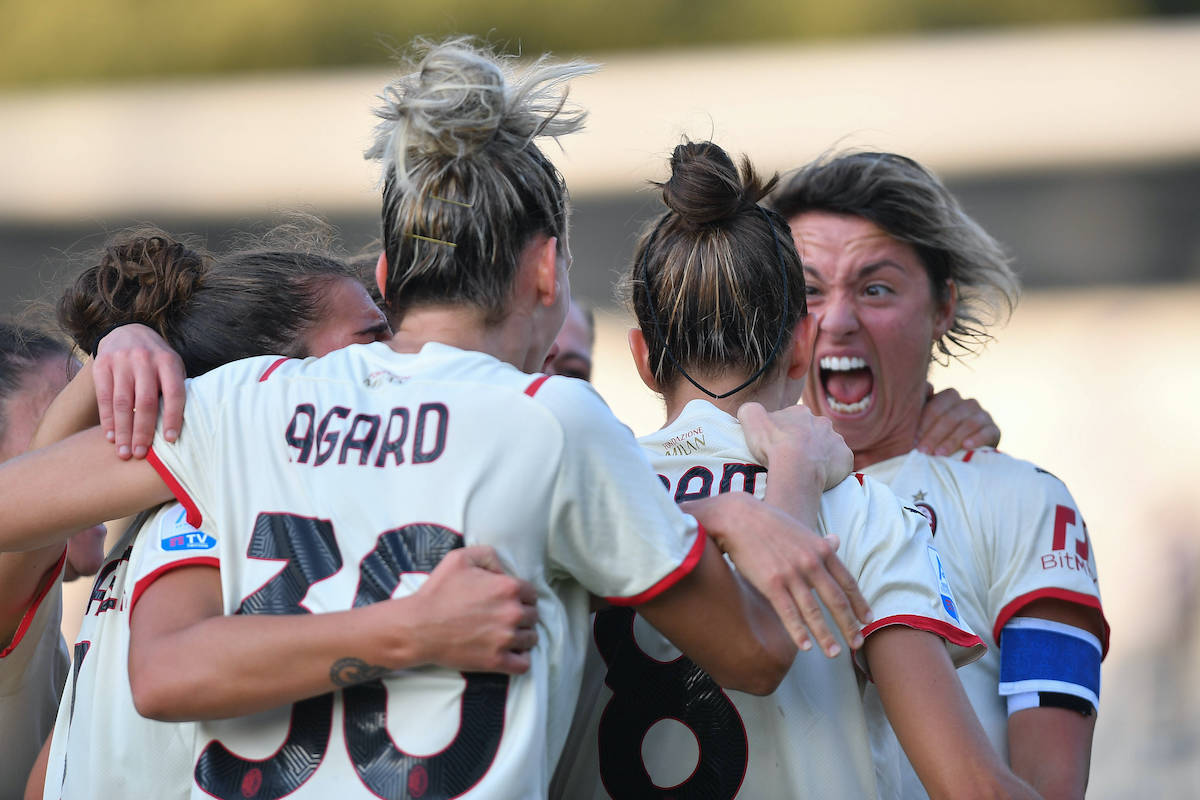 The AC Milan Women beat Sampdoria by a score of 1-0. The game-winner came through a solitary goal from midfielder Greta Adami.

Here’s a summary of how Milan won the match…

The first half started with the Rossonere coming out with all guns blazing. The opening salvo came at the two-minute mark when Valentina Giacinti fired a shot on goal. Giacinti would then have another shot at the eight-minute mark. However, Milan still couldn’t break the deadlock.

Milan would continue to press and probe, and it was Giacinti who was the team’s main attacking threat. She attempted a bicycle volley at the 17th-minute mark, a shot inside the box that went wide (24′), and a third effort that was cleared off the line by Novellino after rounding the goalkeeper (27′).

At around the 23-minute mark, Giacinti went down with an apparent injury. She was also seen wincing in pain during the halftime warmups. She eventually continued in the game.

However, after the match, she posted an Instagram story that showed her wearing a cast. The cast seemed to indicate soreness in her foot or ankle or an implied injury. We won’t know the full extent of Valentina’s injury until a few days from now.

Vero launched her own attack in the 35th minute. She fired the shot directly at Selena Babb who then saved her shot. Adami had her own chance as she hit the post after pouncing on a loose ball from Giacinti (41′).

Babb is on loan at Sampdoria from Milan and they wielded her as a weapon against us and they did so with great effect.

The second half began with Milan on the front foot again. The Blucerchiate were practically encamped in their own half while the Rossonere continued to push forward. The opener came in the 54th minute after Linda Tucceri Cimini’s spot-on corner kick was headed home by Greta Adami at the near post. And with that, Adami opened up her account with Milan.

The Rossonere knew that it wouldn’t be wise to rest on their laurels, so they kept searching for a second goal. In the 58th minute, the Rossonere went close through a shot from Jane, whose stunner from a few yards out nearly found the back of the net.

Babb pushed the shot behind the post and Milan were given a corner.

Selena was, once again, forced into action once more on the hour mark with a brilliant reflex save to deny Valentina Bergamaschi. Valentina would prove to not only be an offensive threat but crucial defensively as she cleared Stefania Tarenzi’s effort off the goal line.

Samp caused a few scares as the game drew near a close. However, the Rossonere had a few chances of their own and remained in thorough control of the match.

In the end, Milan would emerge as the victors of this thrilling contest.

Not surprisingly, AC Milan dominated the match. They had 56% possession, with a total of 19 shots. Seven of those shots were on target.

Milan is one of the few teams in the league that has also won their first four matches for all four years they’ve been in Serie A. They are also the only team in the league to not suffer a single shot on target during this current campaign (Source: Opta).

If there was one standout from the match, it was Greta Adami. The midfielder scored Milan’s sole game-winner and came close to doubling their lead a few minutes later.

She also got stuck in defensively and made a few crucial interventions. Adami was the undisputed MVP of the match and deserves all the plaudits.

Linda Tucceri Cimini deserves to be on this list for several different reasons. The first and foremost of which is that it was her assist that led to Adami’s goal.

She also wasn’t afraid to get down and dirty and do some defensive work.

Then there was Valentina Bergamaschi, who put in a shift herself and also made key interventions.

Laia Codina, Refiloe Jane, Vero, and Laura Agard also deserve special mentions for their game-winning contributions. Jane also stands out for her shot that rattled the post at the 58th minute.

Without them, Milan surely wouldn’t have won this game.

The match will also be the featured game of the week and will be streamed for free on the La7 website. The Rossonere will be looking to extend their winning streak into next week, so tune in to support them.