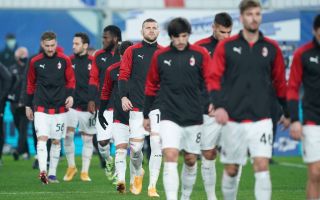 After managing to qualify for the knockout stages of the Europa League, Milan faced Sampdoria away from home in an attempt to add three more points to their tally and continue being top of the table in Serie A.

The game started well for Milan as they had the majority of the possession, but it was Donnarumma that had to make a save first from Tonelli’s header.

It was a tough first half for the Rossoneri with Sampdoria sitting back and not giving much space to both Hakan Calhanoglu and Brahim Diaz. Ranieri tried to plug the gaps in the centre knowing that crosses from wide areas shouldn’t be as dangerous for his team considering the absence of Zlatan Ibrahimovic.

However, it was after a hand ball that Kessie opened the scoring just before break, forcing Sampdoria to come out of their shell. Samu Castillejo scored within a minute of coming on, and despite Ekdal’s late goal it would be enough for all three points.

It was a pleasing display from both Romagnoli and Gabbia at the back as they barely made a mistake and managed to not give into the pressure in the final minutes of the game.

While Kjaer’s injury was a blow for the Rossoneri, Gabbia managed to replace the Dane well was even rewarded man of the match in our post-game ratings.

Romagnoli was the other pillar of the backline, and the Italy international seems to be building performance by performance, regaining his confidence and form just when it’s needed the most.

Brahim Diaz was the one to start the game after he got the nod over Hauge to the surprise of many. The Spaniard, however, was a victim of Sampdoria’s tactics to close all gaps in the middle as fast as possible leaving Brahim with little space to operate.

While the Real Madrid loanee has had many positive moments this season, he’s somewhat struggling to establish himself when starting from minute one.

He was replaced by Hauge at half-time after he was also sluggish the few times he actually had some space in front of him, wasting a couple of chances on the break

Pioli acted quickly at half-time replacing Brahim with Hauge as the Real Madrid loanee wasn’t having a good night. Hauge, on the other hand, was an instant impact as the Norwegian created chance after chance for his team-mates with intelligent and smart passes cutting inside from the flank.

While the youngster didn’t manage to score, he was in the build up for the second goal providing a lovely through ball to Rebic who then assisted the other substitute Castillejo.

It was a well played game tactically by Pioli as his substitutes were on point and at the right time. The only negative is that his team was maybe too keen to hold onto the ball and not waste energy, which allowed Sampdoria to get back into the game and put pressure on Milan for last fifteen minutes of the game.

With Zlatan and Leao absent, it was down to Ante Rebic to lead Milan’s attack. It’s quite obvious though that the Croat is not feeling optimal when played as a lone striker as he is struggling to get himself into a scoring position.

Rebic isn’t playing badly as he has racked up four assists in the past five games, but they all came when he drifted wide on the flank.

Hopefully with both Ibra and Leao recovering soon, it will be one of them leading the attack as even the Portuguese seems better when played as striker, finding free space with his runs behind the defenders.

Rebic feels more at ease when on the flank taking on opponents and providing for his teammates, as he admitted before the game.

It seems though as with every game this group of players is more and more united. Milan fielded a squad with an average age of bellow 23 years, but they looked focused and calm to press and fight for every inch.

Players like Donnarumma, Romagnoli, Gabbia and Kessie showed great composure and leadership, playing the ball intelligently not forcing passes, but waiting the team to regroup and restart.

So much love for this team.

Of course the rest of the players had an important role in the win as they were all tireless, pressing high up the pitch not allowing Sampdoria to have much of the ball but it was the above mentioned four that were leaders for Milan.