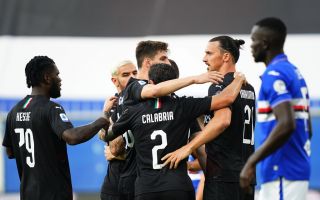 After a hard-fought 1-1 draw against Atalanta at San Siro on Friday, Milan continued their amazing form with a 4-1 win against Sampdoria on Wednesday night.

Zlatan Ibrahimovic scored his fastest ever goal for Milan to give his side the lead just after three minutes, while the Swede then turned provider with a brilliant headed assist for Calhanoglu.

The roles were then reversed as the Turkey international fed Ibrahimovic to make it 3-0, and though Askildsen’s long-range effort ruined the clean sheet, Rafael Leao came off the bench to score a gorgeous strike and make it 4-1.

Here are five things we learned from another entertaining evening…

At the age of 38, Zlatan continues to impress. The Swede managed two goals and an assist and proved that he deserves to stick around for another year.

With Pioli confirmed as coach, it would no longer be a surprise if Zlatan does indeed continue and everyone should be happy about that possibility. Since coming in January, the Swede has brought a winning mentality and has been very important in the dressing room.

Not only that, he has amassed 10 goals and five assists in nineteen games across all competitions, which almost equates to a goal involvement per game – not too bad for someone coming from the MLS with no break and having to play every three days.

While he has had some poor performances, he has been crucial and made a big impact since coming thus fully deserving to be Milan’s main striker next season.

2. The wait is finally over?

Since the restart of Serie A, Hakan Calhanoglu has been in the form of his life. The Turkey international has managed six goals and eight assists in 11 games. That results in a goal contribution every 55 minutes.

So is the wait finally over? Calhanoglu was bought from Leverkusen and Milan were expecting him to be the player he is right now. Although it took him three years, Calhanoglu is showing in a chaotic schedule that he is in a rhythm and can be productive week-in, week-out.

🇹🇷 @hakanc10 since the restart…

Under Pioli he has been playing in his natural position as an attacking midfielder and he is flourishing. On top of that, Hakan has mentioned his good relationship with the current coach and seems to be enjoying his football.

Let’s get that renewal sorted, he’s earned it.

3. Overturn on the right

The right-back position has been a constant problem for the Rossoneri this season with neither Conti nor Calabria living up to expectations.

Since Pioli’s arrival, Conti seemingly got the nod over his Italian team-mate, but in the last few games Calabria stepped in and has been performing better in every aspect of the game as he is looking to make a statement that he deserves to stay.

In all fairness, Conti has been nothing more than a liability. Seemingly the only justification for keeping him over Calabria is that selling the latter would provide the club with pure capital gains as he is a youth product.

That being said, it does not look as the financial state of the club is bad right now and sacrificing the better and younger play in order to make up for a bad investment does not seem fair.

Conti should be the one to go, as we all saw how Davide played under Gattuso last season and that rhythm could be found again.

Rafael Leao has had a mixed bag of performances this season to say the least. A few flashes of brilliance were almost always then followed by a longer period of disappointment.

While the Portuguese still hasn’t gained the trust of Pioli, he has been looking better since the restart. Coming off the bench, he has managed a to get four goals to his name (since Serie A resumed) and he has shown how his flair and speed can open games up and kill them off.

With every game he seems sharper, and that hopefully means that his work ethic is improving which could allow him to change the mind of the management and make him unsellable.

It has been a weird year for the youngster, but we can all see that the talent is there – the only thing missing is the consistency. With Zlatan in the team things may change and Leao will use the opportunity to learn from the very best.

5. Gabbia not ready yet

Matteo Gabbia was given a chance to prove himself again due to the absence of Romagnoli and while the youngster did not disappoint, it just seems that he is not ready yet.

His performances have been decent overall but he makes a few sloppy mistakes a game due to his inexperience, which is not ideal as Milan need a more established centre-back for next season.

However, Matteo does have some talent and it would be wise that the management consider sending him on loan to a lower table Serie A side in order for him to gain experience and more playing time. He does indeed have talent, but he needs to play every week in order to improve and sitting on the bench is not doing him good.