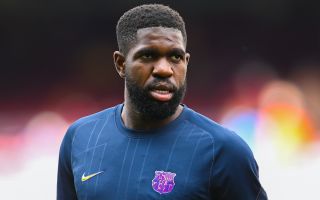 Tuttosport: Out-of-favour Barcelona defender emerges as an option for Milan

AC Milan have identified Barcelona defender Samuel Umtiti as a potential reinforcement ahead of the January transfer window, a report claims.

On their official website, the club announced that Kjaer underwent an arthroscopy on his left knee for the reconstruction of his anterior cruciate ligament and the re-insertion of his medial collateral ligament.

The operation was carried out at the La Madonnina Clinic and was perfectly successful, but he will be out for at least six months as a result which means that the management may now look to dip into the transfer market to cover for the Dane’s absence.

According to this morning’s edition of Tuttosport (via MilanNews), Milan are evaluating different profiles for the centre-back role, and among the players being examined by Paolo Maldini and Ricky Massara is Samuel Umtiti.

Umtiti does not seem to fit into Barcelona’s plans which means he could be available when the window reopens, and could be a bit more simpler than other targets.