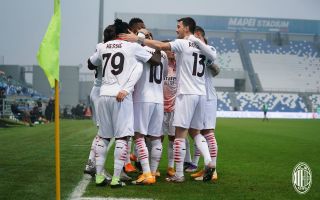 Sassuolo 1-2 AC Milan: Five things we learned – leading by example and a gem on our hands

After two frustrating draws in the Serie A, Milan bounced back in style against an in-form Sassuolo side, grabbing all three points at the Mapei Stadium.

Despite all the absentees, the Rossoneri looked sharper compared to the previous two games and seemed determined to send a message to the league.

Pioli’s men needed only six seconds to open the scoring through Rafael Leao, making in the fastest goal in the history of the top five leagues in Europe.

Just after the 25-minute mark, it was Theo Hernandez showcasing his speed to bypass the whole left flank before passing the ball to Alexis Saelemaekers who put the ball in the back of the net from close range.

The game was running smoothly for Milan, but it was 89th minute when Berardi managed to pull one back for Sassuolo, but it wasn’t enough as the league leaders got all three points.

With a lot of absentees, Milan seemed in trouble ahead of the game against an in-form side, but it was the defence that stepped up this time around, neutralising Sassuolo’s attack.

In particular, Romagnoli was a true leader at the back. Had a lot of clearances and good interceptions throughout the game. It’s been a few good performances in a row for Alessio now, who was hounded after coming back from injury but seems to be picking up the pace now and keeping the critics quiet.

2. Milan have themselves a gem

Kalulu was an interesting signing back in the summer, but no one really thought he was going to slot in the squad straight away due to his age.

However, with Kjaer and Gabbia being injured, the youngster was forced into action and is continuing to impress despite not playing in his preferred right-back position.

Kalulu left the difficult display against Genoa behind him and bounced back in the Sassuolo game, being almost flawless. His confidence on the ball helps him a lot as does his pace to close the gaps down fast and intercept. An exciting player for the future.

After two frustrating draws people and fans were starting to assume that the good run for Milan is at an end. However, the Rossoneri had only one thought on their mind, that is winning and sending a message to Serie A.

When you think about it, the team was missing Kjaer, Gabbia, Bennacer, Rebic and Zlatan, but managed to shut the critics down and further grew on confidence before the final game of the year against Lazio.

Milan’s youngsters stepped up with Hakan and Romagnoli leading them and showed their potential and how much they have grown mentally.

That’s all down to great work by Pioli and the mindset Ibrahimovic has brought into the squad and with January around the corner Milan will hopefully reinforce themselves and push harder in the Serie A and Europe.

4. Stepping up a gear

Hakan Calhanoglu was behind the first goal of the game and was silently dictating the game before being subbed off, and he even had a goal ruled out because of a marginal offside in the build-up.

It much better performance for him as he finally stepped up in Zlatan’s absence, becoming the team’s leader by pulling the strings and creating plenty.

It was a good performance overall for Hakan as he was all over the place and Milan will surely need him to step up yet again against Lazio.

With Ante Rebic being injured it was Rafael Leao to play up front for Milan. The Portuguese scored just over six seconds into the game to give his team the lead, and he had a good game overall. While his work rate isn’t as that of Rebic, he was more in the right areas and his dribble makes him a constant threat.

Rebic and Theo Hernandez have a great connection on the left and it seems to work well when both of them are on that flank. With Leao drifting in and out of games at times it only makes sense to leave him play on top of the attack as he can easily beat players with his pace and skills leaving Rebic to provide from the left.