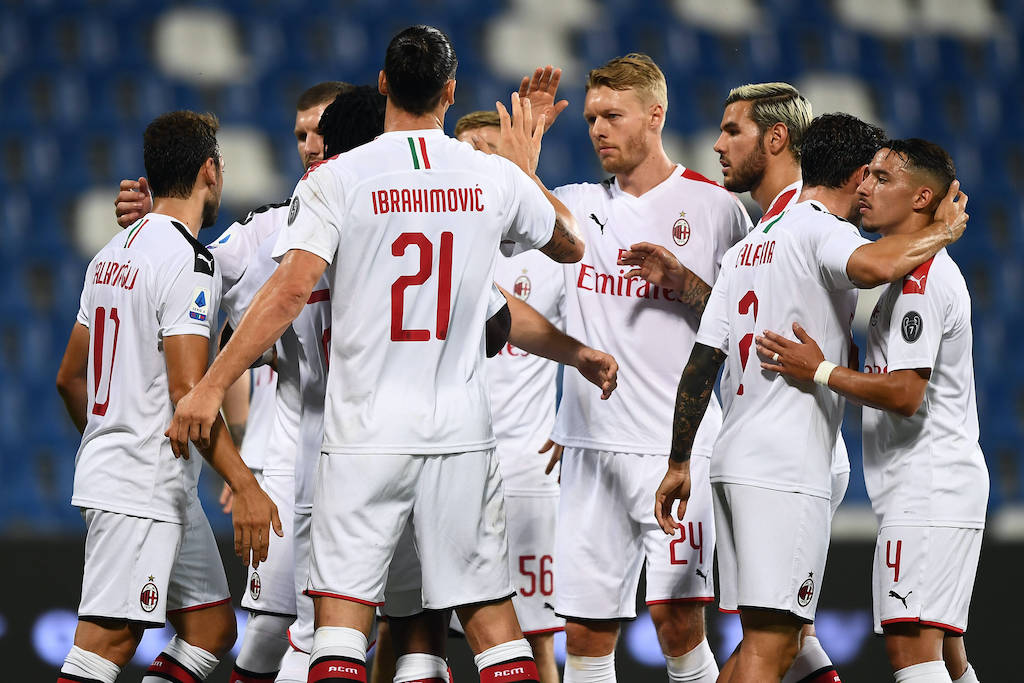 Milan guaranteed themselves a Europa League spot after managing to get three points in their away game against red-hot Sassuolo.

Before jumping into the game, we should also mention that the work of Pioli has not been unnoticed and the past twenty-four hours were full of surprises. Just after victory was secured at the Mapei Stadium, it was confirmed that Pioli had extended his contract with Milan and that Ralf Rangnick will not be arriving.

Both teams had zero losses since the restart of Serie A and it looked from the onset to be a game with a lot of goals. The Rossoneri had some troubles early on with the injuries of Andrea Conti and Alessio Romagnoli, but Hakan Calhanoglu twice turned provider for Zlatan Ibrahimovic as he scored both of the Rossoneri’s goals either side of Caputo’s opener.

Milan continued their amazing run, but Romagnoli, Theo Hernandez and Ismael Bennacer will all miss the Atalanta game with Simon Kjaer also a doubt. Here are five things we learned from the game…

1. Zlatan rolls the years back

After being criticised a couple of games ago, Zlatan has only improved and against Sassuolo the Swede scored a brace to secure the three points, even being named the man of the match in our ratings.

On Tuesday evening we saw the class that Ibrahimovic has, but perhaps with a game every three days we cannot expect a 38-year-old player to be at a hundred percent all the time.

Ibra was brought back not only for his immense technical ability but also for his leadership and experience, both on and off the field. With the extension of Pioli we may well see Zlatan in a Milan shirt next season too.

Hakan Calhanoglu has been on fire since the restart of Serie A. He now has nine goals and eight assists this season and the fact that Pioli has finally allowed him to play as an attacking midfielder has done wonders.

The Turkey international is feeling confident in his preferred position and is showing that on the field, as he is another player Pioli brought back to life. We can see both his assists bellow.

A perfect cross and a perfectly timed though ball. Hopefully he can continue his form into next season and be the key player Milan bought from Leverkusen in the first place.

The 4-2-3-1 formation looks a lot more balanced and well-rounded with him in the hole, as it brings the best out of Rebic too.

It was unfortunate that Andrea Conti ended up injured, but Davide Calabria had another positive performance, building on his last one against Bologna.

Coming through the youth academy ranks, Calabria has shown his passion for Milan and in his few recent displays has been way ahead of Conti in terms of performance.

The injury of the former Atalanta man may just well be the thing Calabria need to play the last few games and prove that he has what it takes to stay at Milan beyond the summer.

As was aforementioned, the win over Sassuolo came with a cost, as Romagnoli came off injured while Theo and Bennacer will be suspended for the next game.

Fortunately, Milan have secured qualification for the Europa League, but continuing this run of form until the end of the season would be a massive morale boost and having to face the currently best team in Serie A without three top players will be difficult.

However, we may get to see Matteo Gabbia get more playing time in what will be a real litmus test for him, and the same can be said of Calabria. Also it will be a good test for Milan’s depth and might be useful to further recognise areas that need focusing during the transfer market.

Whether you like the news of Pioli extending his contract or not, it must be ackonowledged that the management are finally not rushing for yet another revolution while things on the pitch are working.

While Pioli may not be the best solution for a long-term project, he has managed to make this group a whole, boost their morale and make them enjoy football. We have seen a lot of individual improvements under the Italian and we are continuing to see them.

We must remember that a healthy environment with a management team that backs up the coach and the players leads to more confidence for everyone related to the club and performances should improve.

Stability has been a key problem for the Diavolo and yet it is one of the most important things, as seen by the projects that Atalanta and Lazio have built.

With Pioli, Milan have a coach that has good relationships with his players and is seemingly backed up by Maldini and Gazidis. Therefore, should not make the same mistake as with Gattuso who had done a lot to stabilise the club.