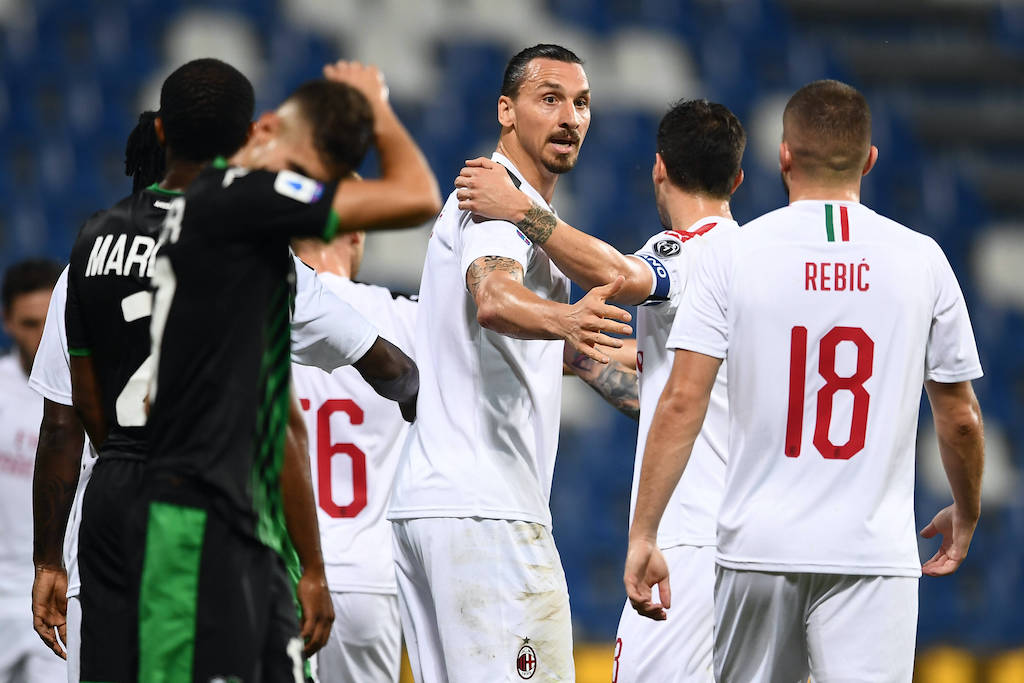 AC Milan moved up into fifth position in the Serie A table with a hard-fought 2-1 win over a resurgent Sassuolo side.

Zlatan Ibrahimovic was the man of the hour for the Rossoneri as he rolled back the years with an excellent performing, scoring twice in the first half through a bullet header and a wonderful composed finish – both assisted by Hakan Calhanoglu – either side of Caputo’s leveller from the spot.

The result virtually secures Europa League football for Milan next season as they are guaranteed to finish inside the top seven, while it also continues an incredible run since the resumption of Serie A which has seen the team win seven of nine games.

Head coach Stefano Pioli made just one change to his starting line-up from the eleven that thumped Bologna 5-1 on Saturday night, with Davide Calabria perhaps harshly dropped in favour of Andrea Conti on the right side of defence.

The home side started brightest and began making inroads down Milan’s left side, causing panic firstly through a Muldur cut-back and then through a Berardi run that resulted in a deflected toe-poke rolling wide of the far post.

De Zerbi’s side continued to win the midfield battle, and what would have been a haunting moment was avoided when Manuel Locatelli skewed his effort wide from 20 yards after finding acres of space inside the sixth minute.

With less than 10 minutes gone Pioli was forced into a substitute as Conti went down grabbing his knee; Calabria his direct replacement in what was an early and very much unplanned change.

Donnarumma was called into his first save of the night in what was his 200th appearance for Milan in all competitions, saving easily in the end after Berardi had cut in from the right and fired a shot between Romagnoli’s legs.

Rebic fired the Rossoneri’s first shot on target up the other end, this time a straightforward save for Consigli after a weak shot from the edge of the box.

The opening goal came in the 20th minute as a result of the Rossoneri winning the ball back high up the pitch, just as they have been in the habit of doing for weeks. Ibrahimovic rolled the ball out wide before shuffling his way back into the box, and he was found by a beautiful cross from Hakan Calhanoglu which didn’t allow the Swede to miss.

Raspadori should have done better on the half-hour mark when he found space before firing over from the edge of the Milan box after neat footwork. Immediately after Pioli was forced into another change as Romagnoli limped off, replaced by Gabbia with the arm band going to Donnarumma.

Ibrahimovic should really have doubled the away side’s advantage once play resumed; the 38-year-old heading straight at Consigli after a delightful whipped cross from Bennacer. Anywhere else, and it would have been 2-0.

Eight minutes before the break, Theo Hernandez went through the back off Berardi and received a yellow card, ruling the Frenchman out of Friday’s game against Atalanta.

Sassuolo came close to levelling from the resulting free-kick as Francesco Caputo’s glancing header just evaded the near post via a deflection. After a VAR review, Luca Pairetto pointed to the spot, with the ball adjudged to have hit the arm of Calhanoglu on the way through.

Caputo stepped up to take the responsibility, and captain Donnarumma could not stop him from levelling as he was sent the wrong way with a fantastic spot kick.

In the first of six added minutes, Milan retook the lead as Ibrahimovic rolled back the years with a superb finish. Calhanoglu led the Diavolo on a fierce break, and the decoy run of Rebic allowed Zlatan to get between the retreating defenders before receiving the pass, rounding Consigli and slotting home.

Sassuolo’s misery was further compounded moments later, as central midfielder Bourabia saw a second yellow card for a nasty late challenge on Rebic and was sent off.

There was yet another change at the break as Diego Laxalt came on for Theo Hernandez at left-back.

Milan began the second half on the front foot, and Consigli was happy to gobble up an effort from the edge of the box from Calhanoglu that was well blocked.

Donnarumma made a fantastic save low at his left post to deny Caputo who had the freedom of Reggio Emilia after being played in behind, but the linesman’s flag went up after the stop.

There was yet another costly yellow card on the hour mark as Ismael Bennacer went into the book, meaning he too will also miss the game against Atalanta.

Ibrahimovic should have had his first Milan hat-trick in eight years after he got himself in behind following a gorgeous one-two with Kessie, yet the Swede’s first touch somehow let him down when a first-time shot would have put the game to bed.

Bennacer was inches away from making it 3-1 in the 74th minute as he drilled a low first-time effort towards the bottom corner, but it clipped the outside of the post with Consigli at full stretch.

A double substitution followed in the 79th minute as Calhanoglu – who added two assists to his total for the season – and Bennacer came off in place of Giacomo Bonaventura and Lucas Biglia.

Consigli produced a bit of brilliance not long after, first to deny a shot from Kessie who had cut onto his right foot, and then twice in quick succession to block Bonaventura’s two efforts on the rebound from close range.

Sassuolo continued to have half-chances, with Berardi having one with three minutes of normal time remaining as his ambitious volley almost went for a throw-in.

That would be the last action from a dramatic meeting at the Mapei Stadium as the Rossoneri machine carried on rolling.