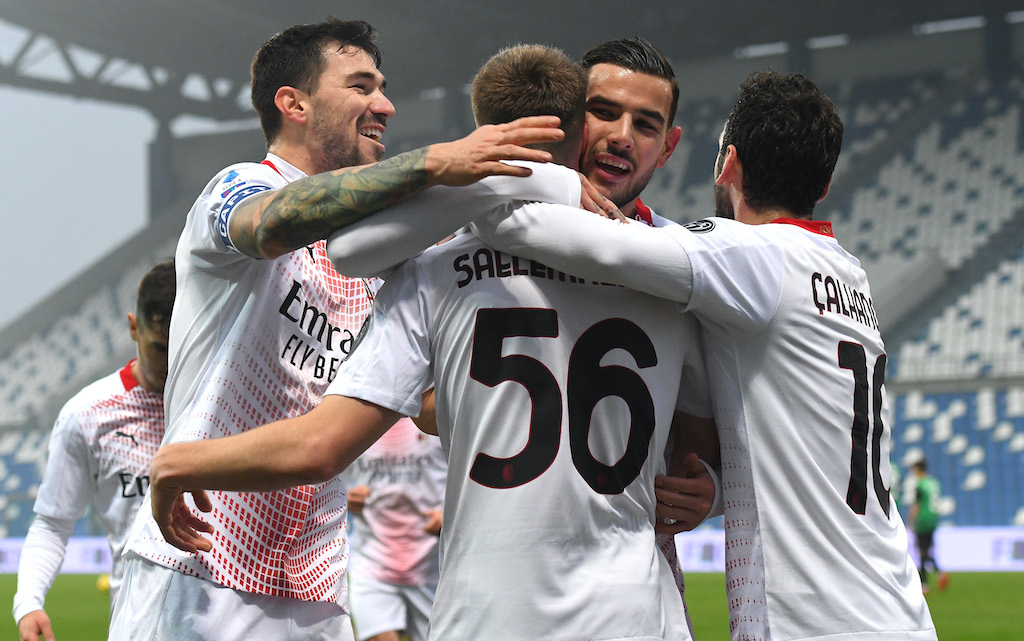 An injury-stricken AC Milan side produced the perfect response to their doubters as they beat Sassuolo 2-1 at the Mapei Stadium.

It took the Rossoneri just over six seconds to get going as a remarkable run from kick-off allowed Rafael Leao to slot home and score a goal that broke several records.

Milan did have a goal disallowed after Hakan Calhanoglu fired home, but there was no chalking off Alexis Saelemaekers’ strike from close range that made it 2-0 before the break thanks to a wonderful run from Theo Hernandez.

Domenico Berardi did score a free-kick in the dying minutes to halve the deficit but Milan hung on to stay top, with Inter beating Spezia to keep the gap at one point.

Stefano Pioli was forced to shuffle the deck a bit due to the injury situation, with Rafael Leao starting up front and Brahim Diaz on the left with Rebic the latest player out. Tonali kept his place in the midfield, while Kalulu partnered Romagnoli at the back.

Milan got off to the perfect start and made Serie A history as they scored essentially straight from kick-off. A driving run down the centre from Hakan Calhanoglu allowed the Turk to roll the ball through to Rafael Leao, who slotted the ball past Consigli.

Leao’s goal was clocked at 6.2 seconds, a new Serie A record beating Paolo Poggi’s goal for Piacenza vs. Fiorentina in 2001 (8.1 seconds).

Milan thought they had made it 2-0 in just the ninth minute when Calhanoglu fired in from the edge of the box after a wonderful cut-back from Leao, however after a length VAR check it was determined that there was offside in the build-up.

The away side continued to press for that second goal, and Alexis Saelemaekers arguably should have done better when a corner was cleared to him on the edge of the box and he fired wildly over when he could have taken a touch.

Donnarumma was forced into his first save at the halfway point of the first half; Berardi predictably cutting inside from the right wing before curling a tame effort straight at his compatriot, though it was a reminder of the danger he brings.

In the 27th minute though Milan did get their second goal, and it was all down to Theo Hernandez. The full-back received the ball well inside his own half from Brahim Diaz and went on a run that must have been at least 70 yards before squaring to Saelemaekers who had the simple task of tapping home from a few yards.

Sandro Tonali deserves credit for his intelligent play too, as he showed good awareness to get out of the action while in an offside position to make sure this time it stood.

Just after the half hour mark Sassuolo came knocking again as a shot from Berardi seemed destined for the bottom right corner, but Romagnoli stuck a boot out and blocked it for a corner with a vital intervention.

The Neroverdi began trying to force the issue and get themselves back into the game before half-time, with Traore the latest to fire on goal six minutes prior to the break but failing to keep his effort down.

Traore again arguably could have done better just a couple of minutes later when a dangerous ball from Berardi to the far post was diverted just wide by the winger at full stretch.

There was a big chance for Milan to make it 3-0 seconds before the break when a counter-attack led to a ball over the top being brought down well by Diaz and flicked to Calhanoglu, who fed Leao but the Portuguese starlet curled his effort wide.

The last attempt of the first half came when Ferrari was not closed down on the edge of the box, though thankfully his shot was easy for Donnarumma to catch.

There was more injury worry for Pioli to contend with as Tonali was forced off at the break due to a physical problem, and he was replaced by Rade Krunic.

The first chance of the second half again went to Traore as he was given space to shoot just inside the box after Calabria dropped down hurt, though the effort was weak and straight at Donnarumma.

Pioli made another change 12 minutes into the second period as Jens Petter Hauge came on for Brahim Diaz, who will have been rueing a big chance he had a few minutes prior where he should have fed the ball through to Leao after stealing it from Berardi and countering.

As if the selection headaches weren’t already enough, Kessie went into the book on the hour mark meaning he will miss the game against Lazio.

Milan’s threat as expected was coming on the counter-attack, and they perhaps should have put the game to bed inside the final 20 minutes when a lung-busting run from Theo ended with Leao’s pull-back being diverted into the path of Saelemaekers, who fired over when he had time.

Hauge almost got his name on the scoresheet in familiar fashion when he cut in from the left side and sent a fierce effort towards the far right corner that Consigli did well to parry away.

Pioli’s penultimate change came with just over 10 minutes remaining as the goalscorer Saelemaekers was replaced by Samu Castillejo. The final substitution came when Daniel Maldini took the place of Calhanoglu.

The last effort of the game came as a ball eventually found Hauge over the top though the Norwegian was unable to do anything other than shank his effort well wide.