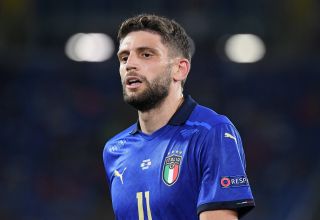 Sassuolo CEO shuts down Berardi rumours amid Milan links: “We will not consider any negotiations”

AC Milan’s hopes of signing winger Domenico Berardi from Sassuolo have been dealt a huge blow by their managing director.

This morning’s edition of Gazzetta di Modena (via MilanNews) wrote that Berardi is among the options that are being considered by Milan to upgrade the right wing position, and the Italy international has asked to leave the club.

TMW then added that Berardi returned from winning the European Championships with Italy and asked the Neroverdi to facilitate a summer exit as he wants to try a new challenge. He considers his cycle in Emilia closed, and Sassuolo are willing to let him go if they can get €30m for him, having previously asked for €40m.

Now, Sassuolo CEO Giovanni Carnevali has spoken to il Corriere della Sera about the future of the 27-year-old, and confirmed his desire to keep the player in the absence of any concrete offer.

“No offer has formally arrived. In any case, we will not consider any negotiations. It took us two months to sell Locatelli to Juventus for 37.5 million and now there are less than fifteen days to go until the transfer market. There would be no time. And in any case, for us Berardi has an even higher economic value,” he said (via MilanLive).