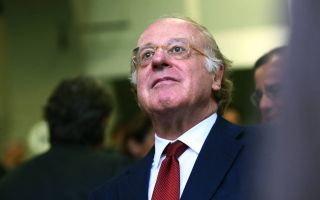 AC Milan president Paolo Scaroni refused to discuss last night’s refereeing performance but instead praised the team for a display of character and heart.

The first was the decision to award Franck Kessie two yellow cards in the first half and send him off when the second looked soft in comparison to some of the other challenges being made, and the second was a 93rd minute penalty call.

Scaroni spoke at the Milan Foundation event ‘Restore The Music to Milan’ and offered some thoughts after last night’s home defeat against Atletico Madrid.

“I never talk about the referees, it’s an argument that must be left aside. Of course, being defeated is always painful, but I carry optimism and confidence with me because I have seen a good team, combative and resilient and this gives me hope for the future,” he said (via Calciomercato.com).

“It was very exciting for everyone to see the Champions League again at San Siro. Milan must always stay in the Champions League, this is the goal we set ourselves. Then the matches are made up of incidents and yesterday there were some that were not in our favour, but overall I saw a good team. I remain confident also for this Champions League group, because I have seen a team that is capable of beating anyone.

“My conclusion is that it’s not nice to be defeated, we don’t like it at all. But this morning I thought that as a team we have given such a proof of character, courage and determination that makes me optimistic for the future, because life is made up of many victories and even some defeats. When there is some defeat, you have to regain courage and start fighting again. This is my conclusion.”

On Pioli, he added: “He is doing very well, he has created a real team, with a spirit of optimism made up of young people who want to play together: in doing so I am sure that the results will also come.”