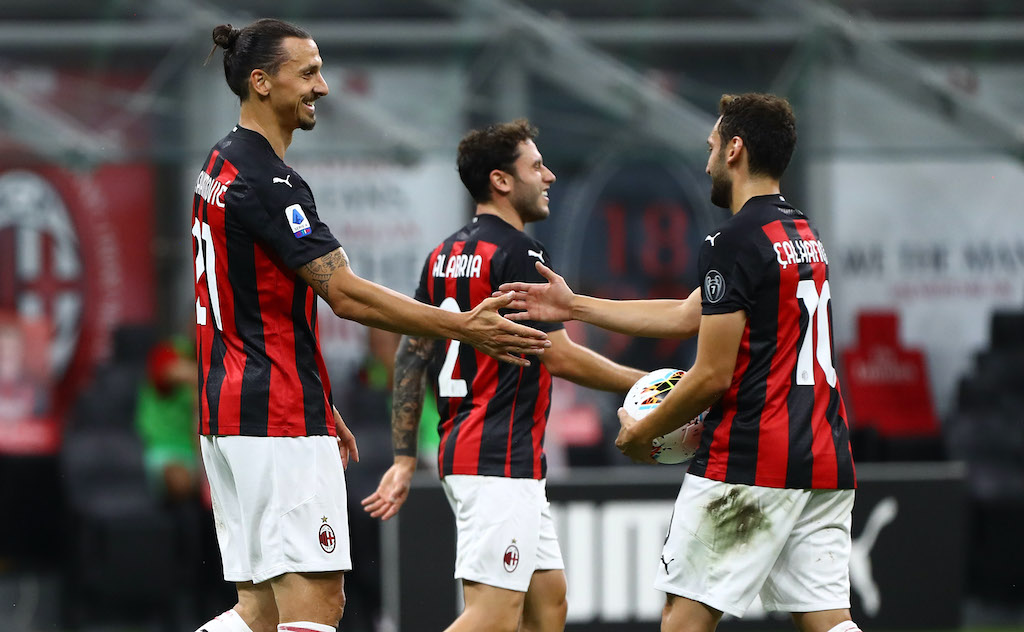 AC Milan will kick off their 2020-21 Serie A campaign at Serie A on Monday night when they face Sinisa Mihajlovic’s Bologna.

Milan were unable to call upon defenders Alessio Romagnoli, Mateo Musacchio and Andrea Conti against Shamrock as all three continue to nurse injuries sustained towards the end of last season.

The trio will be out for Monday’s game too, as will Rafael Leao who has spent time in quarantine and has not yet trained with the group, but Ante Rebic will return from suspension.

Rebic is expected to occupy the left wing spot with Alexis Saelemaekers dropping to the bench. Hakan Calhanoglu and Samu Castillejo complete the trio behind Zlatan Ibrahimovic, with Franck Kessie and Ismael Bennacer in front of the defence.

It will be a back four again with Davide Calabria and Theo Hernandez on the right and left respectively. The young Matteo Gabbia will partner Simon Kjaer at centre-back, just ahead of Gianluigi Donnarumma.

Last season was Mihajlovic’s first full campaign in charge of the club, after having replaced Filippo Inzaghi in January 2019, but they were unable to build on their 10th-placed finish in 2018-19 as they ended in 12th.

Back on 13 July Mihajlovic held a press conference following reports of a serious illness in which he announced that he was battling leukemia, but like the fighter he is he continued managing Bologna and eventually returned to the dug out.

For the game against the Rossoneri, Mihajlovic will be looking to use the pace and technical quality of Riccardo Orsolini and Musa Barrow on the break, as well as the creative ability of Roberto Soriano.

The only selection issue for the ex-Milan boss is that Gary Medel is suspended, with former midfielder Andrea Poli in pole position to take his spot.

This has been one of Milan’s more one-sided games in Serie A since the turn of the century, with the Rossoneri having prevailed in 15 out of the last 22 league games between the two sides dating back to 2008.

Bologna did win 1-0 against Milan at San Siro back in the 2015-16 season, but before that you would have to go back 12 years to find the last time the Rossoblu prevailed at the Meazza.

Milan won both meetings in 2019-20, riding goals from Krzysztof Piatek, Theo Hernandez and Giacomo Bonaventura to emerge victorious 3-2 at the Renato Dall’Ara, while there were five different scorers in the 5-1 win towards the end of the season which you can watch below.

The main threat for Bologna continues to be Riccardo Orsolini, and the Italy international proved that last season by scoring eight goals and adding six assists in 37 Serie A games.

The Rossoblu’s best chance of securing a result comes from their ability to counter with speed and precision against a weakened Milan back line, and in that regard Barrow and Palacio must also be watched.

If things go to plan for Milan though, it will be centre-backs Danilo and Tomiyasu who will have the hardest task for the away side, keeping out the creative threats of Rebic, Ibrahimovic and Calhanoglu.

Speaking of which, Calhanoglu is without a doubt the man in form for Pioli’s side at the moment, having continued his fantastic form from the end of last season with a goal and assist in Dublin.

Hakan Calhanoglu has both scored and provided an assist in four of his last seven games for #ACMilan across all competitions.

Just like the game on Thursday night, to expect a very comfortable win would be dangerous so early in the season and with injury problems, but if Milan are serious about their top four aims then nothing other than three points will do.