Following the draw against Lille mid-week, and the big win against Napoli at the weekend, Milan will be looking to build on the positive run tomorrow. An interesting game against Fiorentina awaits at the San Siro.

Stefano Pioli, who is still COVID-19 positive, hasn’t been on the bench for the last two games. Instead, staff member Daniele Bonera has been leading the team from the sidelines, and it has gone very well so far.

In his pre-match press conference, the temporary manager admitted that Fiorentina have a quality squad and that the game will be ‘tough’. He also praised his own side for the recent success, confident that they will win.

Milan have a relatively fit squad available for this game, though Zlatan Ibrahimovic and Rafael Leao are still out injured. Both will be evaluated again next week and it seems a return isn’t too far away.

Saturday’s edition of La Gazzetta dello Sport reported that it will be a 4-2-3-1 with Davide Calabria on the right, Simon Kjaer and Alessio Romagnoli the centre-backs and Theo Hernandez on the left protecting Gigio Donnarumma. 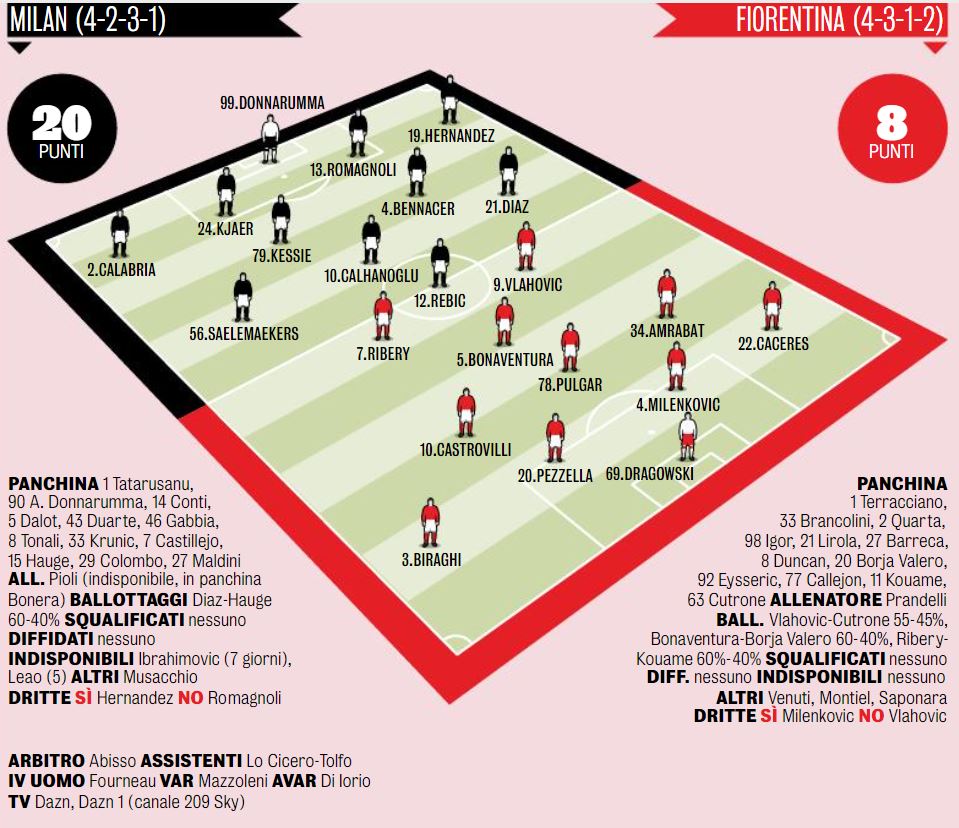 Sandro Tonali got some game time against Lille and is expected to start again, this time alongside Franck Kessie. Ismael Bennacer didn’t train today due to a minor injury issue, thus likely to miss out tomorrow.

In the forward department, Alexis Saelemaekers is back from his injury and will slot in at right-wing. Hakan Calhanoglu, despite recent criticism, will keep his spot as the playmaker behind Ante Rebic, while Brahim Diaz will be on the left.

A total of five changes compared to the line-up that played against Lille, in other words, which is a sign of the Rossoneri’s depth despite the key injuries.

Since Rocco Commisso took over the club in 2019, Fiorentina have projected a very optimistic view on the future. However, it hasn’t exactly gone to plan as they have had three managers already, with Beppe Iachini the most recent one to go.

Cesari Prandelli has been brought in to solve the situation and although they managed to beat Udinese mid-week in the Coppa Italia, they lost against Benevento at the weekend. Currently in 15th place, they are desperate for points.

Twelve points separate the two sides ahead of tomorrow’s encounter, so Fiorentina need to start winning. It’s hard to argue against their squad quality, with the likes of Nikola Milenkovic, Gaetano Castrovilli and Jack Bonaventura present.

The latter, of course, left Milan this summer as his contract expired despite having done very well in the post-lockdown period. Hopefully, that decision won’t come back to haunt the Rossoneri in tomorrow’s clash.

In recent years, Milan have struggled a bit against Fiorentina, losing two games and drawing one of the last five. Perhaps even more worrying, the Rossoneri have only won one of the last three home games against La Viola.

Therefore, it’s time to get revenge and tomorrow is the perfect time to do it, further cementing their spot at the top of the standings. In fact, the last home game against Fiorentina is one Milan would like to forget.

Vincenzo Montella’s side (coach at the time) managed to score three goals at the San Siro and take three important points with them back to Tuscany. Milan were humiliated and Marco Giampaolo was sacked the following round.

As for the last encounter, which took place at Stadio Artemio Franchi, Milan were held to a 1-1 draw as Erick Pulgar converted a late penalty to cancel Ante Rebic’s opener.

➤ Only Juventus (78) have won more matches than AC Milan (72) against Fiorentina in Serie A.

➤ Fiorentina have won their last two away games against AC Milan in Serie A; only between 2012 and 2013 have the Viola had three consecutive wins on the road against the Rossoneri in the top flight.

➤ AC Milan have picked up at least 20 points in their eight matches to a Serie A season for the second time (in the three points for a win era) – the first since 2003/04, where they went on to win the title.

➤ AC Milan have scored in each of their last 28 league matches, only between December 1972 and December 1973 have the Rossoneri been on a longer streak in Serie A (29 consecutive games).

➤ AC Milan and Atletico Madrid are the only two teams still unbeaten in the top five European leagues since football resumed post-lockdown – 20 games for the Rossoneri, 19 for the Colchoneros.

➤ Under Cesare Prandelli Fiorentina have lost their most recent Serie A match against Benevento: the last Viola manager to lose both their first two games in charge was Stefano Pioli in 2017.

➤ Fiorentina haven’t scored in their last two away Serie A games: they last failed to score in three consecutive league games on the road back in 2012.

➤ Fiorentina’s Gaetano Castrovilli scored his first goal in Serie A at San Siro against AC Milan in September 2019 – he has already been involved in the same number of goals (five) in the current Serie A campaign than the whole of last season, in 25 fewer games.

For Milan, it will be very interesting to see if Rebic can build on his positive performance mid-week, given that he prefers to play on the left-wing. His runs in behind the defence will be very important to open space for others, such as Diaz.

This was the key for the goal against Lille, as he found himself one-on-one with the goalkeeper after a great pass by Tonali. He unselfishly squared it to Samu Castillejo, but he will surely be looking to get on target tomorrow.

In addition to the Croatian, without mentioning the obvious key players, Diaz needs to make the most of this opportunity. He hasn’t played from start many times in the league, but he certainly has the quality to do very well tomorrow. 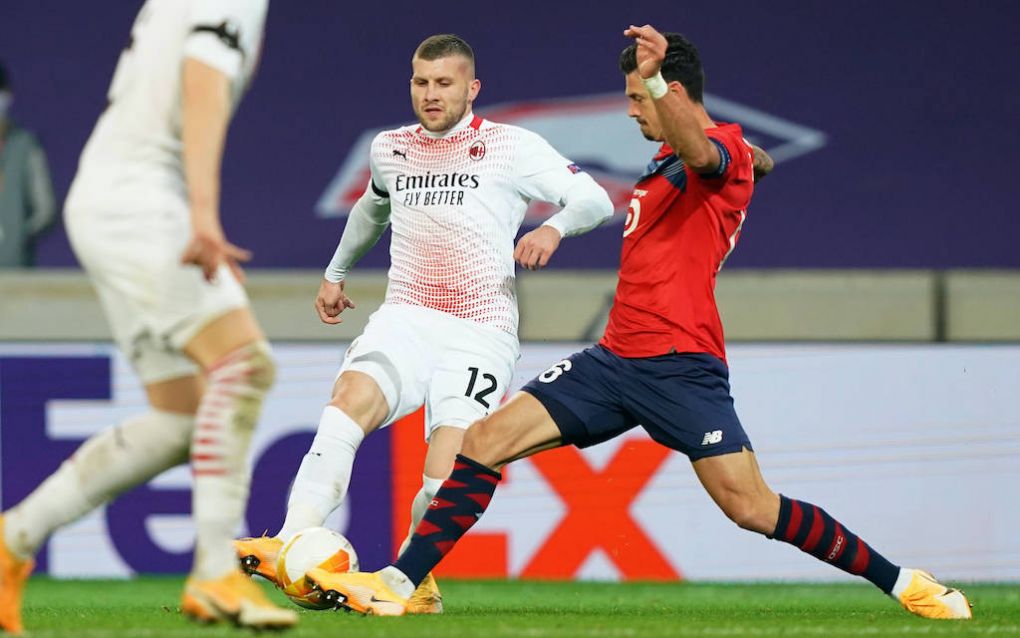 As for Fiorentina, Milan should be extra careful with Franck Ribery. When he last visited San Siro (against Inter this season), he was behind all three goals for Fiorentina and was arguably the best player on the pitch, although they lost 4-3 in the end.

The Rossoneri don’t want to give him too much space with that passing foot, considering how much damage it can do to the defence. They should also keep an eye on Bonaventura, who will be eager to prove his worth in front of the Milan directors.

Milan are obviously the favourites to claim the three points, but that doesn’t mean it will be an easy game. The 2-2 draw against Hellas Verona proved this and Pioli’s men will have to be concentrated from start to finish.

As long as the Rossoneri get things right, which they certainly did against Napoli, they should be able to celebrate after the final whistle. In Ibrahimovic’s absence, Rebic will be hungry to score the goals needed.

READ MORE – Maldini reveals how Milan discovered Saelemaekers: “I didn’t know him before”