AC Milan will have to try and put the media frenzy to one side and focus on getting another three points when they welcome Sassuolo to San Siro on Wednesday.

The headlines continue to be dominated by a number of controversial topics such as the European Super League and renewals that are yet to be resolved, but Milan have a chance to make it two wins from two at home after a four game slump when the Neroverdi arrive.

Stefano Pioli has insisted now is not the time to talk about potential distractions, though it seems as if his squad for the game will once again be depleted.

Just as it seemed as though AC Milan were back at full health, four players are reportedly now in doubt for the game against Sassuolo tomorrow.

According to the latest from Sky reporter Peppe Di Stefano (via MilanNews), neither Ismael Bennacer nor Zlatan Ibrahimovic are doing well at the moment and are not at 100%, while the same can be said for Theo Hernandez and Hakan Calhanoglu. That could mean that the likes of Rafael Leao and Diogo Dalot get the nod again.

Davide Calabria will start at right-back with Simon Kjaer and Fikayo Tomori the centre-back pairing, meaning Alessio Romagnoli will be on the bench still. In the middle of the field, Pioli tried Franck Kessie and Soualiho Meité in Tuesday morning’s training.

UPDATE: None of Bennacer, Ibrahimovic or Theo Hernandez are in the squad.

Sassuolo have continued their reputation as being one of the most exciting teams to watch in Serie A, and their current standing of eighth place has certainly been earned. A Europa League place now appears out of reach as they are eight points behind Roma, though it has been a season of progress once again. 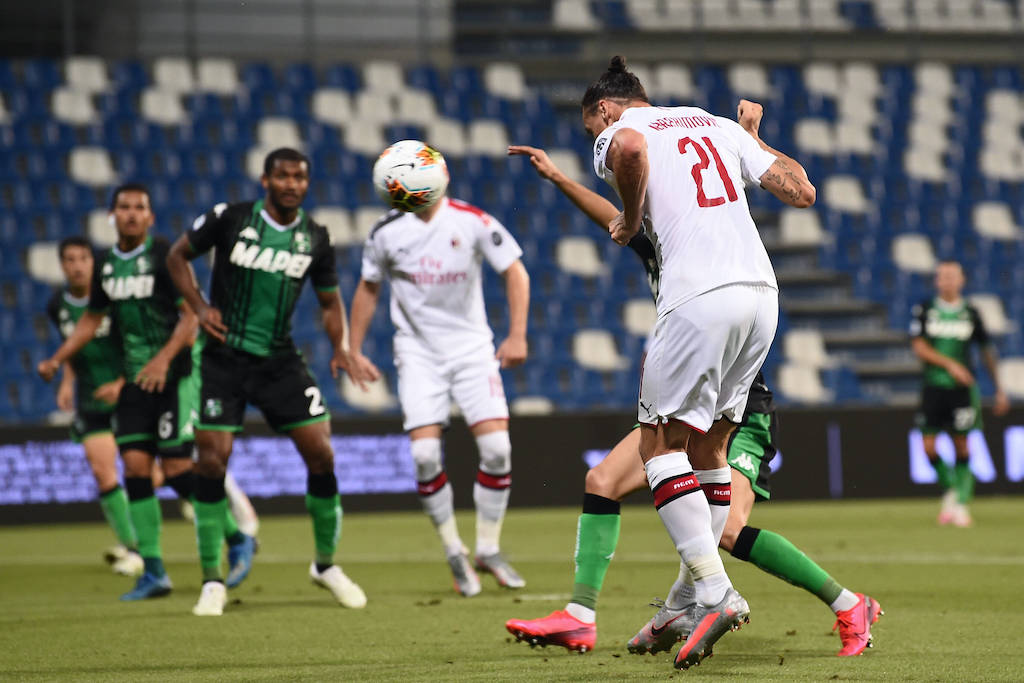 The Neroverdi come into the game off the back of two straight wins against Benevento and Fiorentina, but prior to that they had won 2 in 13 league games. Their defeats this season have come against the likes of Inter (x2), Milan, Juventus, Atalanta and Lazio, which shows that they are just short of taking that next step despite being second after eight games.

In terms of team news, reports suggest that striker and second-top scorer Francesco Caputo could still remain sidelined for Sassuolo, while Kaan Ayhan (COVID-19) and Filippo Romagna are expected to miss the game.

Domenico Berardi was back with a bang on Saturday as he scored twice and he is expected to start. Primavera product Giacomo Raspadori should start up top, while Manuel Locatelli is expected to come back into the XI too.

In 19 clashes between the sides, Milan have beaten Sassuolo 12 times, while losing on just five occasions, though fans will remember a time where the Emilia-Romagna side were somewhat of a bogey team when they first reached Serie A.

In their first meeting of the season, the Rossoneri managed to strike after just seven seconds thanks to Rafael Leao’s lightning finish from kick-off, and a second goal from Saelemaekers before the break rendered Berardi’s 89th-minute free-kick a mere consolation.

The same fixture last year produced a 0-0 draw in what was the 120th anniversary celebrations for Milan, while the return game saw Milan run out 2-1 winners thanks to a brace from Zlatan Ibrahimovic.

➤ Milan are unbeaten in their last nine Serie A games against Sassuolo (W7, D2), after having lost four of their previous six league meetings against the Neroverdi (W2).

➤ After conceding in each of their first five home games against Sassuolo in Serie A (W3, D1, L1), AC Milan have kept a clean sheet in their last two encounters against them at San Siro (W1 D1).

➤ Milan have won their last two Serie A games – the last time they enjoyed a longer such run was last January: on that occasion the run began with a win against Sassuolo.

➤ The last two Serie A games played by Milan on Wednesday were at San Siro: a defeat against Juventus and a draw against Udinese; the last time the Rossoneri played three league games in a row without winning on this day of the week was back in October 2009.

➤  Sassuolo won their last away league game, against Benevento; they could win consecutive away games in Serie A for their first time since last November, when they won four on the bounce.

➤ Milan (12) and Sassuolo (10) are the two sides to have scored the most penalties in Serie A this season; however, the last one scored by the Rossoneri was back on March 3rd and since then, the Neroverdi have netted four penalties.

➤ No side has scored more goals than Milan during the first 30 minutes of play in Serie A this season (21 goals, level with AS Roma).

➤ Among the players with 10+ goals in Serie A this season, Milan striker Zlatan Ibrahimovic has played the fewest games (15 goals in 17 matches).

➤ Domenico Berardi has scored more Serie A goals against Milan than he has vs any other: the Sassuolo striker has scored nine league goals against the Rossoneri, including the only time he has netted four goals in a single game in the competition (in January 2014).

For the Rossoneri it could be another game where the quality of the depth options is truly tested, with time running out for the likes of Meite, Brahim Diaz and Dalot to prove that they deserve backing for the future.

If Ibrahimovic starts then he will be the key man without a doubt, but Rebic is in excellent form once again in the second half of the campaign – just like he was last season – and will want to build on his goal against Genoa.

For the away size, there is absolutely no doubting that Berardi is still the main threat. He is the top scorer with 13 league goals and has the highest rating of the entire squad on WhoScored, with four assists to his name as well.

Locatelli is another player who will be watched closely given that he is an academy product and a talent that some fans insist Milan should regret letting go of.

This would not be a straightforward game at the best of times against a team that certainly knows how to put other sides in danger, but it feels as though it could be an even more difficult evening if Pioli is forced into major changes. The team are fighting for a top four spot, and there is no room for mistakes.

READ MORE: Sassuolo boss reveals he does not want to lead his team out against Milan amid Super League saga