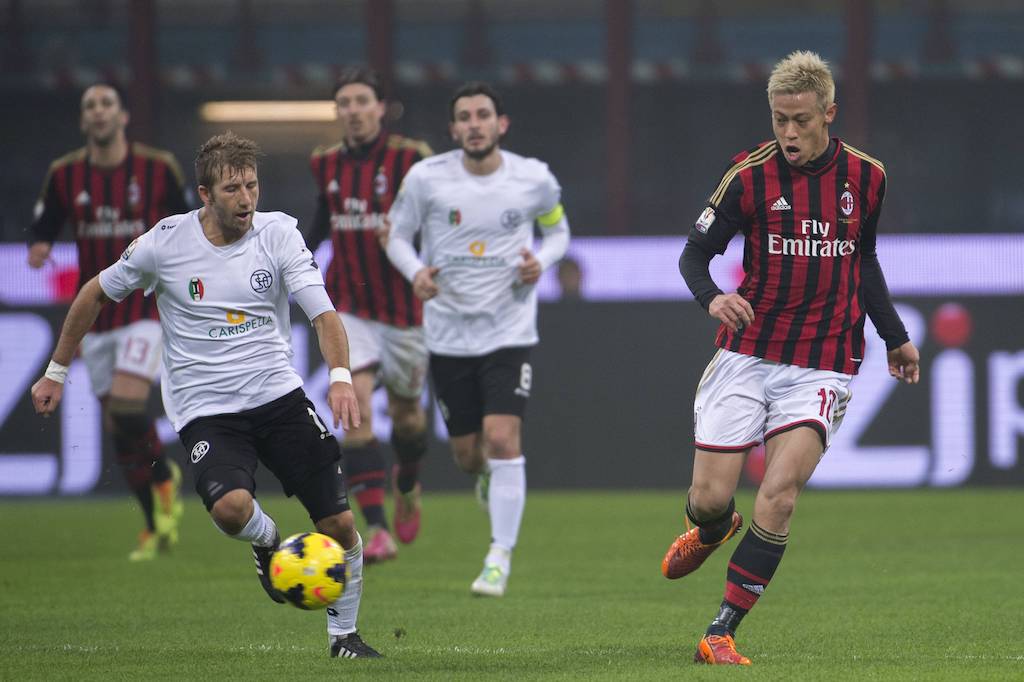 AC Milan will be looking to make it three wins from three to start the 2020-21 Serie A season when they welcome Spezia on Sunday.

Milan have actually won their first five competitive games this season when factoring in the Europa League qualification, but they come off the back of their most dramatic victory yet, that being a penalty shootout win over Rio Ave in Portugal on Thursday, a game which went 120 minutes and 25 penalties.

Stefano Pioli has insisted that his side are not tired, but he will once again be without a number of absentees for the game at San Siro.

As mentioned, Pioli has some selection problems as Alessio Romagnoli, Mateo Musacchio, Leo Duarte, Andrea Conti, Ante Rebic and Zlatan Ibrahimovic will all miss out.

The latest reports suggest that Sandro Tonali could play from start, giving Franck Kessie some much-needed rest after what was a hard-working performance. Alexis Saelemaekers should start on the right-wing with Brahim Diaz on the left, but an extra eye must be kept on Jens Petter Hauge.

The biggest dilemma, of course, is the role up front. Daniel Maldini showed that he isn’t comfortable in that position and Rafael Leao isn’t 100% fit yet. It will be between the latter and Lorenzo Colombo, who wants redemption after missing his penalty against Rio Ave.

Spezia have had a good start to their first ever Serie A season all things considered, as they have three points on the board from their first two games.

They responded well to an opening day mullering by Sassuolo by winning 2-0 at Udinese in Round 2, and they have made some interesting signings including Tommaso Pobega and Agoume from Milan and Inter respectively.

Spezia will be without the quartet of Elio Capradossi, Gennaro Acampora, Federico Mattiello and Giuseppe Mastinu for the game against Milan, while Claudio Terzi picked up a red card against Udinese and will miss out.

Milan have only played one official fixture against Spezia and it came back in the 2013-14 season, when the Rossoneri ran out winners in the Coppa Italia.

Robinho, Keisuke Honda, and Giampaolo Pazzini gave Milan a comfortable 3-1 victory on that night, while it should also be noted that the Rossoneri are unbeaten in their last 14 Serie A games against newly-promoted teams (W9).

For Milan, all eyes will be glued to Jens Petter Hauge if he does indeed make his debut for the club in any capacity, but attention should be paid to Tonali if he starts.

The midfielder made a big difference on Thursday night as he dictated the pace of the game against Rio Ave, and he continues to grow into his new team.

For Spezia, the main threat is undoubtedly Andrej Galabinov. Galabinov has scored all three of their goals so far this campaign, and the 31-year-old Bulgarian striker is finally making a name for himself after bouncing around lower league teams in Italy.

Just like recent predictions have stated, it would perhaps be dangerous to assume that Milan will steamroll a side that don’t have much to lose, especially given then injury issues at the moment.

However, if Milan are serious about a top four finish they absolutely categorically have to win a game like this without too much trouble. Added prediction: Leao will score.