AC Milan will be looking to plant themselves even more strongly inside the top four places when they host mid-table side Udinese on Wednesday night.

Stefano Pioli revealed in his pre-match press conference that he is expecting a battle from Luca Gotti’s side, with some selection dilemmas still to resolve.

Milan’s victory against Roma came at a cost as Ante Rebic, Hakan Calhanoglu and Zlatan Ibrahimovic all came off with muscle problems. Rebic will be available for the game against the Friulians, but Calhanoglu will miss at least two games and Ibrahimovic four or more. Mario Mandzukic will not return for ten days, while Bennacer also will not be risked.

Sky Italia report the Milan team that Pioli could field against Udinese. A back four of Pierre Kalulu, Simon Kjaer, Alessio Romagnoli and Theo Hernandez will be in front of Gianluigi Donnarumma.

The big headline from that is of course that Tomori would sit on the bench again in place of the captain Romagnoli. Tomori is tired, the report claims, while Calabria also has a slight fatigue, and in his place will be Dalot or Kalulu.

Udinese currently sit 12th in the Serie A table having won seven, drawn seven and lost 10 of their opening 24 league games this season, which represents an improvement on last season’s relegation battle.

Their form under head coach Luca Gotti has been good recently though, with just one defeat in their last seven games including draws with both Atalanta and Inter and impressive wins over Hellas Verona and Fiorentina.

In terms of team news, Gotti will be without former Milan forward Gerard Deulofeu, winger Fernando Forestieri, plus Jajalo and Pussetto. Argentinian midfielder Roberto Pereyra – who has two goals and four assists in an injury-interrupted campaign – is back from suspension.

He is expected to stick with the usual 3-5-2 formation, with the impressive Juan Musso in goal protected by a back three of Becao, Bonifazi and Nuytinck. Stryger Larsen and Zeegelaar will be the right and left wing-backs, with a midfield three of Rodrigo De Paul, Walace and Arslan. Roberto Pereyra and Fernando Llorente – both formerly of Juventus – will be up front. 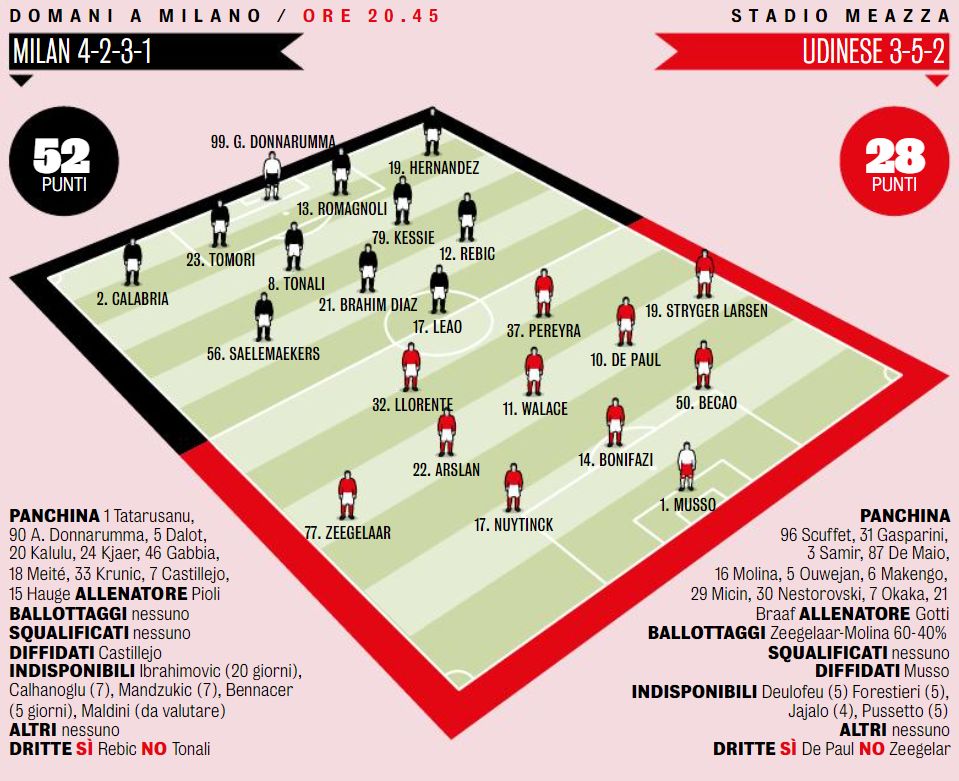 Milan have a good record against Udinese and have won 24 matches out of a total of 47 games played between the two teams. Udinese have defeated Milan on 16 occasions.

The Rossoneri have lost just once against the Bianconeri at San Siro since 2007 and that came back in the 2016-17 season when the visitors triumphed 1-0. Since then, Milan have won two of their three home games against Udinese, with the other being a 1-1 draw.

At the start of last season, with Marco Giampaolo at the helm, Milan lost 1-0 away against after Rodrigo Becao headed in a corner in the second half. In the reverse fixture, though, Ante Rebic was the big star with two goals, one of which came in injury time in a 3-2 win.

Earlier this season when the teams met at the Friuli, Ibrahimovic’s acrobatics were enough to secure a 2-1 win in the final minutes, proving this fixture is rarely short of drama.

➤ Milan have won their last two games against Udinese in Serie A: the Rossoneri could win three consecutive matches against the Friulians in the competition for the first time since 2008.

➤ Only Inter (15) have picked up more points than Udinese (10 – W3, D1, L1) in the last five Serie A matches. AC Milan have lost three of their last five home Serie A games (W2), one more defeat than in all the previous 23 home games under Stefano Pioli.

➤ Udinese have only won one of their last seven away Serie A games (D3 L3), after having won four in their previous seven matches on the road (D1 L2).

➤ Udinese have scored the fewest goals in the first half in Serie A this season (only nine), while only Napoli (eight) have conceded fewer first half goals than Milan (nine). 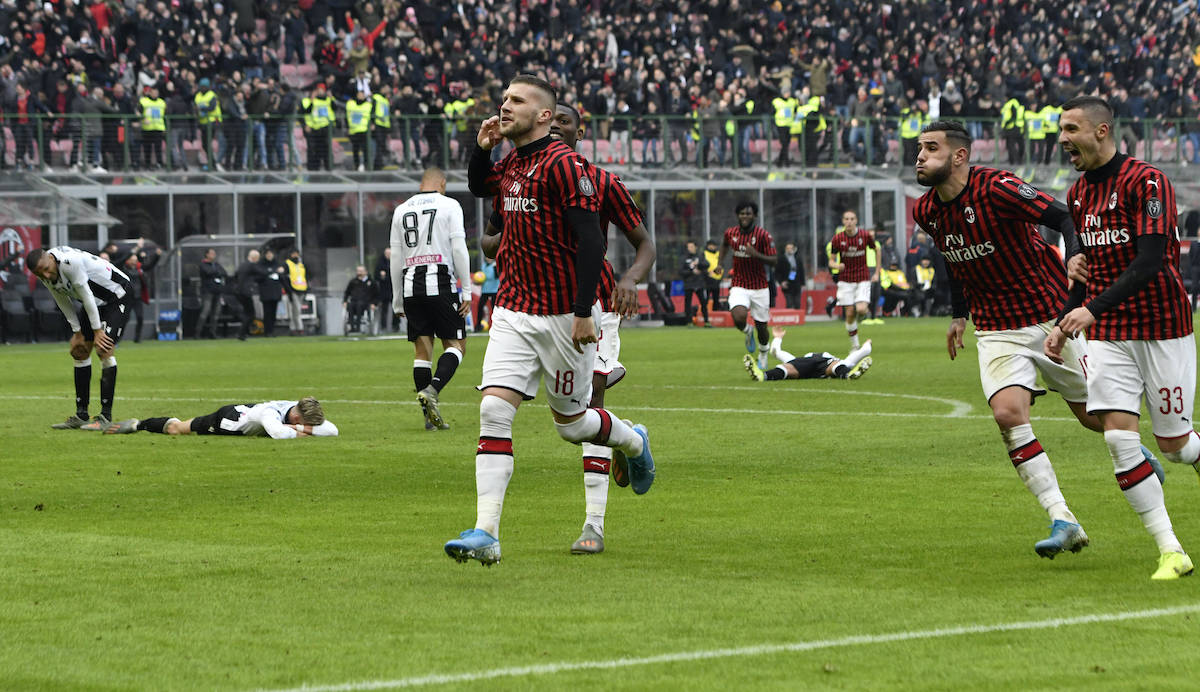 ➤ Among the teams he’s faced more than once in Serie A, Udinese are the team against which Milan’s Ante Rebic has the best minutes per goal ratio, netting two goals in 99 minutes played for the Croatian (one every 50 minutes).

➤ In the second half of this season (since 29th January), only Romelu Lukaku (six goals) has scored more goals than Milan striker Ante Rebic in Serie A (four goals in four appearances).

➤ Udinese’s Rodrigo de Paul has scored two goals against Milan in Serie A, though both have been in Friuli – the first of these, in January 2017, was his first ever goal in the Italian top-flight.

All eyes will be on Rafael Leao on Wednesday night as he leads the line for Milan and looks for his first goal since early January, though all six of his goals so far this season have come from the centre-forward position.

There will also be a big opportunity for Alessio Romagnoli to show Pioli what he is capable off and deepen his selection dilemma, while the same can be said for Pierre Kalulu, Sandro Tonali (with Bennacer soon back), Brahim Diaz and Samu Castillejo.

For the away side, Rodrigo De Paul is still their main attacking threat despite being pushed back into a midfield three from his right wing role as he has five goals and three assists so far this term.

The production has been much more spread though as Okaka and Pussetto also have three goals each amid a number of players to have netted, but it is De Paul who has the highest WhoScored player rating.

Given that Pioli is set to rotate and keep things fresh, expecting a walkover against a team in such good recent form seems like it would be unreasonable. This could be a real struggle based in recent games, and emerging with three points before a tough trip to face Hellas Verona is a necessity by any means.