AC Milan will be looking to rebound from back-to-back defeats and get back on the right track against Bologna on Saturday.

The Rossoneri were thoroughly outplayed in their last Serie A encounter, losing 3-0 to Atalanta last weekend, and were knocked out of the Coppa Italia in midweek in a game full of controversy and drama.

Head coach Stefano Pioli stressed the importance of bouncing back immediately in his pre-match press conference, as he continues to juggle absences.

Pioli will have to come up with some fixes for his attacking department as Brahim Diaz is injured, while Simon Kjaer is also out with a muscle problem. The good news is that Mario Mandzukic, Sandro Tonali and Ismael Bennacer will return from injury.

Hakan Calhanoglu tested negative for Coronavirus on Friday, but it is unknown whether he will play any part in the game as of yet.

La Gazzetta dello Sport (via MilanNews) are reporting that Gianluigi Donnarumma will be protected by a back four of Davide Calabria, Fikayo Tomori, Alessio Romagnoli and Theo Hernandez from right to left.

Bennacer is unlikely to be risked from the start so Sandro Tonali should partner Franck Kessie, with Samu Castillejo (ahead in the battle with Alexis Saelemaekers), Rafael Leao and Ante Rebic in support of Zlatan Ibrahimovic.

Bologna had an inconsistent start to the season under the familiar Sinisa Mihajlovic and found themselves in a comfortable 10th place after 10 rounds, but they have won just once in their last 10 games in the league, with five draws.

The home side will have long-term absentee Federico Santander out, while speculation is suggesting that Gary Medel – who has missed the last five games with a calf problem – will miss out along with Ibrahima Mbaye and Federico Ravaglia as the host’s only other absentees. 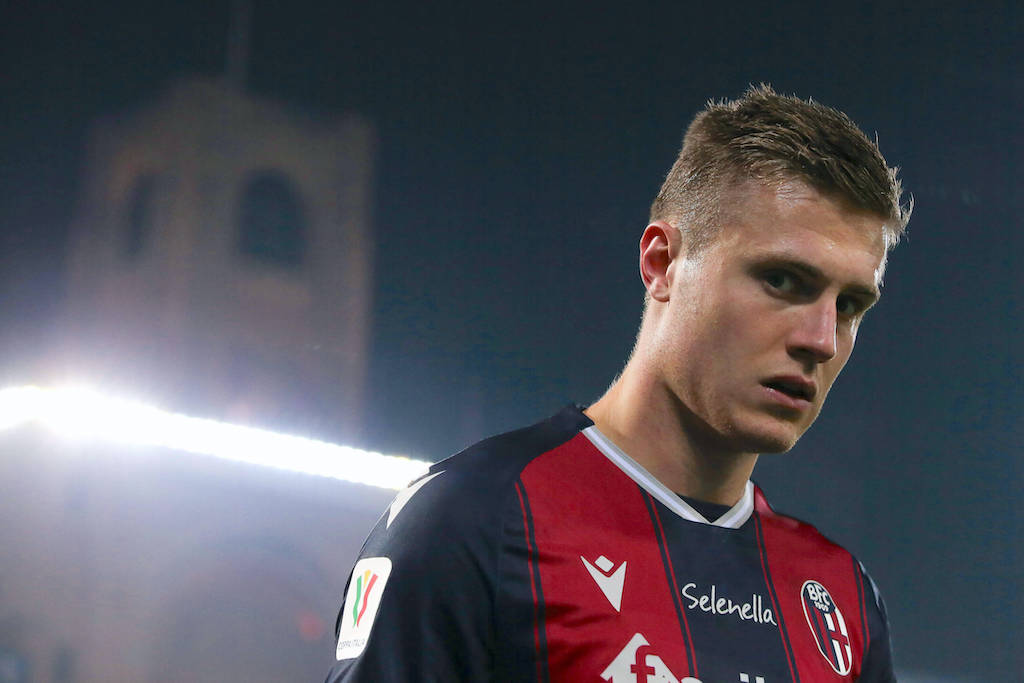 Mihajlovic is seemingly deciding between Jerdy Schouten and Mattias Svanberg as to who will partner Nicolas Dominguez in the holding midfield positions. The attack should be composed of Roberto Soriano, Musa Barrow and Riccardo Orsolini behind Rodrigo Palacio.

Bologna are one of the opponents that AC Milan have had the most success against in recent years having won 16 of the last 23 meetings between the teams, losing only twice.

In fact, you’d have to go back to 2002 to find the last time the Rossoneri lost at the Renato dall’Ara when Fresi and Cruz scored in a 2-0 triumph for the home side. The last time Milan lost to Bologna at all was back in January 2016.

Milan did the double over the Rossoblu last season, winning 5-1 towards the end of the season in the home leg with five different scorers: namely Saelemaekers, Calhanoglu, Bennacer, Rebic and Calabria.

The return fixture was a 3-2 thriller during a difficult period for Milan as Krzysztof Piatek, Theo Hernandez and Giacomo Bonaventura scored the goals to keep Bologna at bay.

➤ Milan have scored at least 2 goals in their last 15 away matches (Serie A).

➤ Milan have been winning at both half time and full time in 10 of their last 11 away matches (Serie A).

➤ Milan have won 9 of their last 10 matches against Bologna in all competitions.

➤ Milan have been winning at both half time and full time in their last 4 matches against Bologna in all competitions.

➤ Milan have scored at least 2 goals in 7 of their last 8 matches against Bologna in all competitions.

➤ There have been under 2.5 goals scored in Bologna’s last 3 games (Serie A).

For Mihajlovic’s men there is no question that the experienced Roberto Soriano continues to be their creative spark from the playmaker position. The former Milan target has a combined 10 goals and assists in league play this season, with Riccardo Orsolini next on the list with six. Soriano also has Bologna’s highest average WhoScored rating.

For Milan, a lot of the eyes will of course hopefully be on the attack and how the new-look quartet can trouble their opponents, but it will be interesting to see how Fikayo Tomori gets on during his first start since joining from Chelsea. Seeing Leao and Rebic on the same pitch at the same time should be fun, too.

The two recent defeats have piled the pressure on this game and that is why expecting a comfortable victory – especially with the absences – seems optimistic. Nonetheless, given the contrasting fortunes of the two sides this year, it simply has to be a win.

Have your say on the game over on the Rossoneri Discord!