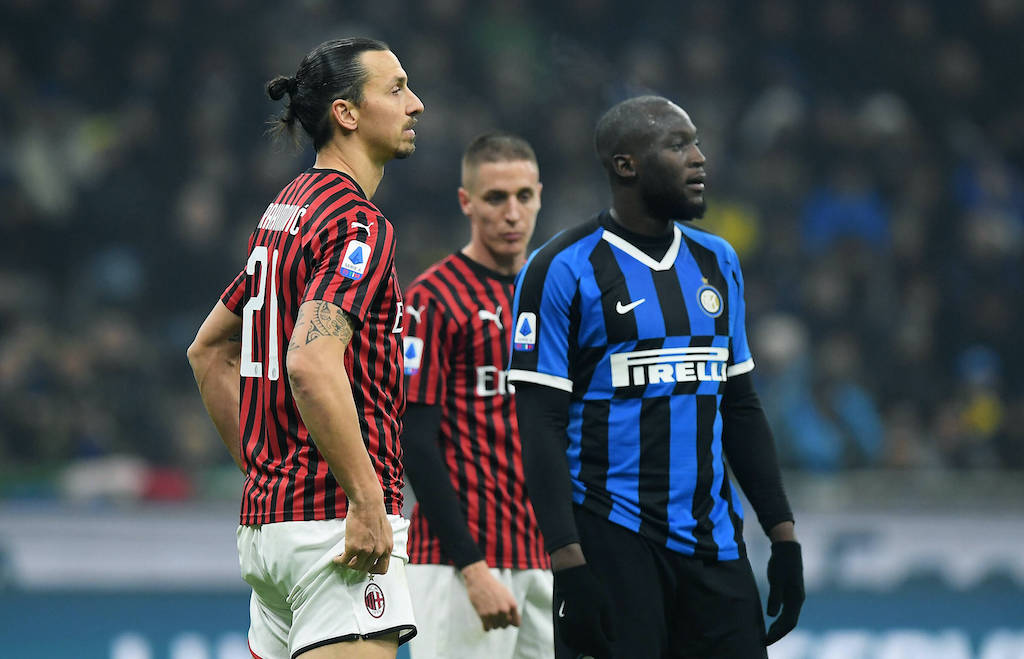 Inter will ‘host’ AC Milan in what will be the strangest Derby della Madonnina in many a year at San Siro on Saturday night.

There are a number of different external factors that make this quite a peculiar derby compared to the usual, including a host of COVID-positive players and the fact the game will be played with around 80,000 fans less than a normal fixture between these two sides.

However, it is still an absolutely crucial game in the context of the ambitions of both sides, with a long unbeaten run on the line for Milan and a big test beckoning for Inter in terms of their title credentials.

It has been a mixed week of news for head coach Stefano Pioli as he looks to prolong his side’s 15-match unbeaten streak in Serie A, a run which stretches back to the back end of last season post-lockdown and is in fact 19 games across all competitions.

In terms of absentees, Pioli will be without Ante Rebic who has not recovered from his elbow dislocation, while Mateo Musacchio is also continuing his recovery from surgery.

According to the latest from La Gazzetta dello Sport, the expectation is that Gianluigi Donnarumma will be protected by a back four of Davide Calabria, Simon Kjaer, Romagnoli and Theo Hernandez from right to left, with Ismael Bennacer and Franck Kessie ahead of them.

Alexis Saelemaekers – fresh from his debut for the Belgian national team – is expected to be on the right wing, with Hakan Calhanoglu down the middle and Rafael Leao on the left completing the trio acting behind Ibrahimovic.

📰 The probable starting line-ups for the #DerbyDellaMadonnina, according to @Gazzetta_it.

Inter have started the season in solid fashion, with the feeling in the blue half of the city that it really is a team built to win now. They have been victorious in two of their opening three league games against Fiorentina (H) and Benevento (A), but drew their last game against 10-man Lazio 1-1.

Antonio Conte will be without a number of players in midfield and defence as Radja Nainggolan, Milan Skriniar, Roberto Gagliardini, Alessandro Bastoni, Andrei Radu and Ashley Young have tested positive for Coronavirus.

There are more selection problems too. Il Corriere dello Sport have reported that Lautaro Martinez will have his condition evaluated by Inter’s medical staff ahead of the game having played 3,000 metres above sea level in Bolivia for Argentina, but it was assumed Alexis Sanchez could take his place if needed.

Now, it seems like even that might not be an option. According to Chilean outlet Adnradio (via MilanNews), Sanchez suffered a muscle injury during Chile-Colombia which means he too will be out.

La Gazzetta dello Sport have a makeshift back three of D’Ambrosio, De Vrij and Kolarov in front of Handanovic, with Hakimi and Perisic the right and left wing-backs.

The midfield will include Marcelo Brozovic, Arturo Vidal and Nicolo Barella, while Lukaku and Lautaro Martinez – presuming he is fit – will be up front.

Milan are without a win in their last eight Serie A games against their Nerazzurri cousins, with the most recent victory coming back in the second half of the 2015-16 season.

That night it was goals from Alex, Carlos Bacca and M’Baye Niang that made it a memorable night for the Rossoneri supporters, but since then the only victory against Inter came in the Coppa Italia in 2017-18 as Patrick Cutrone scored an extra-time winner.

Il Biscione have prevailed in the last four league games, including the most recent fixture which was a 4-2 thriller. Milan were 2-0 up at the break thanks to goals from Rebic and Ibrahimovic, but Inter roared back to win thanks to goals from Brozovic, Vecino, De Vrij and Lukaku.

There have been 225 official matches between the two teams, with Inter having won 82 and Milan 76.

For Milan, the match-winner is obviously going to have to be either Zlatan Ibrahimovic or Hakan Calhanoglu on paper, but what the game could very well hinge on is the performance of Alessio Romagnoli.

If the captain adjusts to the speed of the match quickly and he is adequately supported by the other three members of the defence – who are all bang in form – the the Diavolo should keep Lukaku and Lautaro relatively quiet. If Milan keep a clean sheet, they have to back themselves to win.

For Inter, given their immense selection problems, it will be down to Lukaku to try and haul them to victory in this game. Without doubt the likes of Vidal, Barella, Brozovic and Hakimi all have the quality to be decisive in games, but the Nerazzurri No.9 is the one that Kjaer must stick to like glue.

There is just something about this particular derby that feels so strange. Whether it’s the overhanging Coronavirus pandemic and the absentees that have resulted, the lack of fans and/or Milan’s recent bad run against Inter, it feels like predicting a victory would just be over-confident.

One thing is for sure: if Pioli’s men do pull this one out and move onto four wins from four, it will be the biggest mental hurdle they have overcome so far under his tenure.