AC Milan will be looking to make it four wins out of five to begin the season when they welcome newly-promoted Venezia to San Siro on Wednesday night.

Milan lost their 100% league record on Sunday as they drew 1-1 with Juventus at the Allianz Stadium, but spirits are still high after what feels like an important point gained, bouncing back in the right way after the defeat at Anfield.

The Rossoneri ended their daunting trio of games against Lazio, Liverpool and Juve with a win, a loss and a draw, so they will be hoping to get the feeling of victory back against the side from Venice.

Milan faced Liverpool and Juventus with a depleted squad and not much has gotten better with the passing of a few days as there are at least six players unavailable for the game against Venezia.

Zlatan Ibrahimovic is still suffering with swelling in his Achilles tendon and is not expected to be risked, while Olivier Giroud is still battling pain in his back and left training early on Tuesday so he should be rested.

There isn’t much depth in midfield either as Tiemoue Bakayoko sustained a calf muscle problem in the win over Lazio and will not be available and Rade Krunic is still battling a muscle issue in his right calf.

Junior Messias is not at his best physical condition and will have to wait to make his debut, while finally in defence both Davide Calabria and Simon Kjaer are expected to miss the next two games with slight muscle strains.

Therefore, the team that is expected to take to the field comprises of Mike Maignan in goal protected by Pierre Kalulu, Fikayo Tomori, Alessio Romagnoli and Theo Hernandez. Sandro Tonali and Ismael should be the double pivot with Kessie getting a rest with Alexis Saelemaekers, Brahim Diaz and Rafael Leao the trident behind Ante Rebic, who will fill in up front again.

Venezia are back in the top flight for the first time in 19 years having been promoted from Serie B last year. They finished in fifth place but came up through the play-offs, though they are finding the adjustment hard as they already sit just one place above the relegation zone.

They did get their first Serie A win against Empoli – another side who came up from the second flight – but they did not follow that up at home against Spezia, losing 2-1 to a stunning 25-yarder from Mehdi Bourabia. Interestingly, Paolo Zanetti’s men have now conceded in the 89th minute or later in each of their last three league games.

In terms of team news, there are three players that are set to miss out for the Arancioneroverdi as Luca Fiordilino (shoulder), Lauri Ala-Myllymaki (knee) and Luca Lezzerini (muscle problem) are all ruled out.

There is some speculation that Ethan Ampadu – who is on loan from Chelsea and is a player the likes of Tomori, Bakayoko and Giroud know – could make his debut after spending time in quarantine, but below is the line-up La Gazzetta dello Sport believe will start. 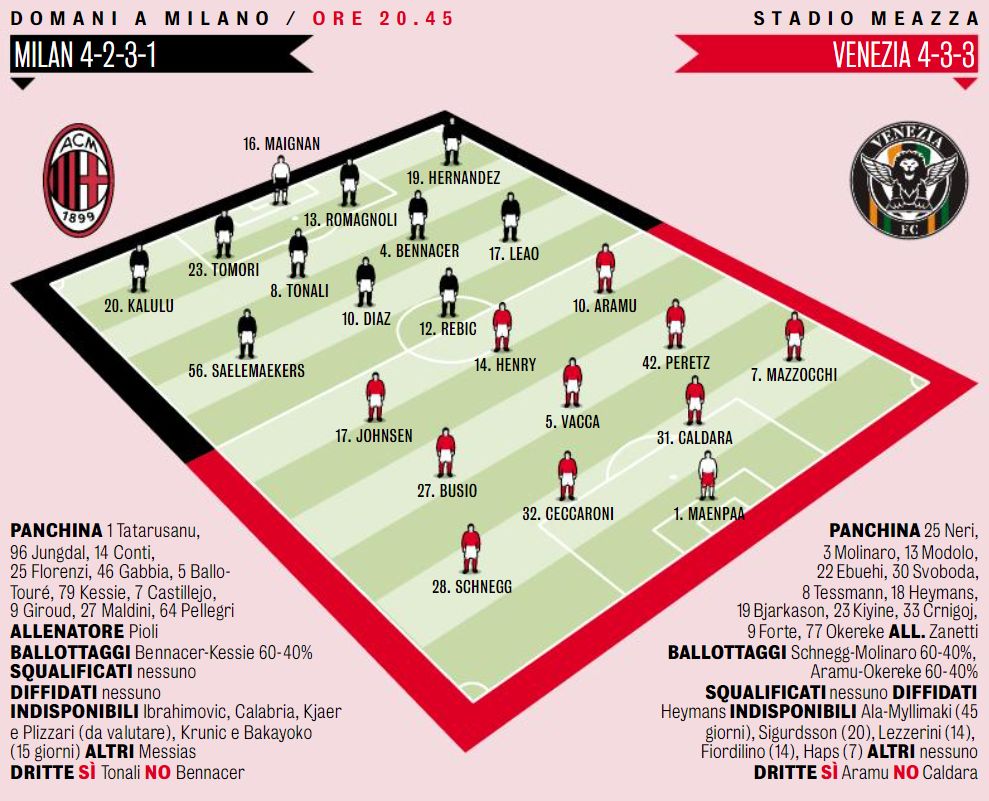 This will be the first time that Milan have faced Venezia since February 2002, when the Rossoneri ran out 4-1 winners on the road thanks to a Javi Moreno brace plus goals from Cosmin Contra and Kakha Kaladze.

Milan have won four of their last six games against Venezia and the last time they lost was in the year 2000 when the Lagunari emerged 1-0 victors. The last game at San Siro actually ended 1-1, with Andriy Shevchenko getting Milan’s goal.

➤ Milan will face Venezia in Serie A for the first time in 7150 days (24 February 2002): the Rossoneri won that game 4-1, thanks to Javi Moreno’s only two goals in the Italian top-flight.

➤ Milan have lost only one of their last 19 Serie A matches against promoted sides (0-2 vs. Spezia, last February): they have won 13 games (D5) in the process, keeping 11 clean sheets.

➤ Milan have won three of their last four Serie A home games (D1), conceding only once in the process; as many home matches as they’ve won in the previous 10 such meetings (D2, L5), only keeping two clean sheets.

➤ Venezia won their last Serie A away game against Empoli: they’ve previously won consecutive away matches only once in the competition (three in 1943).

➤ Venezia have conceded three of their last four Serie A goals from minute 89 onwards: so far the latest Milan goal was scored by Rebic against Juventus in the last match (76′).

➤ Only Verona’s Ivan Ilic is younger than Milan’s Sandro Tonali, among players with at least one goal and one assist in Serie A this season.

➤ Venezia’s Mattia Caldara has also played for opponents Milan, appearing in one Coppa Italia game and one Europa League match for the Rossoneri.

Milan will be looking for Rebic to continue his red hot streak of form a day after turning 28 as the Croatian has 2 goals and 2 assists in his last 3 games across all competitions, but there will also be an eye on Rafael Leao and Alexis Saelemaekers to provide support and spread to contribution.

Of course Tonali is having a purple patch at the moment so eyes will be glued to him, but certain players such as Ismael Bennacer and Theo Hernandez will be called upon to show exactly why they are considered pillars of this team, while an interesting opportunity has emerged for Pierre Kalulu and Alessio Romagnoli due to injuries.

The Venetians are obviously somewhat of an unknown quantity and they will arrive at San Siro hoping to spring a surprise. As per WhoScored, their stand-out performer so far has been the American talent Gianluca Busio.

Ceccaroni and Okereke aren’t too far behind and have each already scored a goal this season, with Venezia boss Paolo Zanetti hoping that a fluid front three can cause Milan’s somewhat makeshift side some problems.

Given the fact the team are coming off the back of a period that will have used a lot of energy and they have little depth to rotate because of injuries, this doesn’t feel like it will be a Cagliari-esque blowout of a game nor a polished and intense performance like the Lazio one, but we’d take the same end product as long as it is three points.

READ MORE: Rotation a temptation for Pioli but Milan cannot let their guard down in next two games