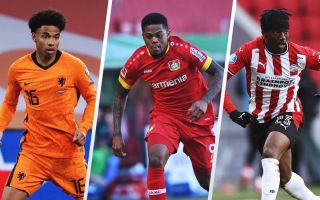 Even though there are nine games remaining, the Milan management will have half a mind on next season and fine-tuning the squad ahead of 2021-22.

Of course, they hope to be able to have guaranteed funds from a return to the Champions League after a seven-year absence to be able to pour into the pot, but will have to wait and see how the finale to the current campaign unfolds.

There seems to be a mutual agreement among large sections of the fanbase and the media that Milan are in desperate need of a new right winger. Alexis Saelemaekers is a useful system player and Samu Castillejo has been used plenty too, but neither offer the quality needed for a team that has aspirations of winning a trophy, to be brutally honest.

We have decided to take a look at seven wingers who could be perfect for the Rossoneri not just in terms of being the missing piece to the attack in a 4-2-3-1 which at the moment is very lop-sided, but also that fit the vision of Elliott Management perfectly: young, with high potential, affordable and low wages.

We start with perhaps the most ambitious name on the list, as Chukwueze has been and continues to be linked with many of Europe’s elite clubs.

The 21-year-old has been playing predominantly on the right this season and has registered one goal and three assists in just over 1000 minutes of league action this season, with 14 goals and 15 assists in 110 league appearances overall for the Valencian club.

Chukwueze has pace and power, drawing comparisons to Arjen Robben because of his tendency to cut in onto his stronger left foot before shooting. He is incredibly direct which is something that Milan do not have on the right at the moment, and although there may be apprehension about another player nicknamed ‘Samu’ coming from Villarreal, everything points to the Nigeria international offering a frightening attacking outlet.

There are two possible causes for concern. Firstly, his price tag would likely be high given his immense potential and the competition. Secondly, his defensive work rate would not be that same as Saelemaekers for example, although he does press high.

Stengs has been at Alkmaar since 2016 and his development over the last couple of seasons has been very impressive, causing some top clubs to take notice.

He racked up 13 combined goal contributions (5G, 8A) in 25 league appearances last season and has followed that up by amassing 6 goals and 4 assists in 24 Eredivisie games so far this term. He has 23 goals and 23 assists in 107 games overall for AZ Alkmaar.

Now a full Netherlands international, Stengs isn’t a typical direct winger although he does carry plenty of attacking threat. He is good at holding the ball up, playing smartly on the counter, releasing passes at the right time and beating a man when needed.

He has all the tools to become a well-rounded inverted winger and while consistency is an issue, he would come from an exciting Alkmaar side that are very much geared around pressing and attacking space.

Chukwunonso “Noni” Tristan Madueke is the latest exciting English attacking export plying his trade overseas, and he has been in nothing short of sensational form for PSV Eindhoven this season at the age of just 19.

Signed from Tottenham’s youth system, Madueke has progressed through PSV’s U17, U19 and U23 sides, making his breakthrough this season amassing 9 goals and 8 assists in 32 games across all competitions.

The teenager is mentioned in the same breath as Jadon Sancho in terms of his playing style and comparable career choices. Between The Lines praise his ‘pace, directness, trickery, tactical understanding and the ability to use both feet’ as reasons why he could go to the very top.

Madueke is no doubt raw and would probably take even more time to adapt that Rafael Leao did, for instance, but he is a unique and exciting talent who has had a fantastic first season in senior football, which suggests he could make the transition well. The problem could well be competition, especially from England.

The first of the right-footed players in the selection, Hlozek continues to gather plaudits due to his excellent performances not just for Sparta Praha, but for the Czech national team too despite his age.

He has 18 goals and 19 assists in 73 games for the Prague-based side across all competitions and has been prolific in this season in particular, racking up 11 goal contributions (5G, 6A) in 9 games. Milan should have had a look at him in both Europa League group games, but he was injured for both and didn’t feature.

There are a number of areas where Hlozek seems to be excellent, as he is fast, direct, accelerates quickly, moves smartly, has a great touch and technique, dribbles well and perhaps most importantly is not frightened of a battle.

The reservations come from the fact that he has not really been tested at the top level as the Czech league is, with respect, of dubious quality and in Europe he is yet to establish himself. An unpolished diamond, without doubt.

If Elliott Management are ready to make a sizeable investment and secure a statement signing to fix a problem area, then Bailey would be a fantastic shout.

Despite being 23 – meaning he is not far off entering his prime years – the Kingston-born speedster has already racked up 151 games for Leverkusen with 36 goals and 24 assists across all competitions. He has 13 goal contributions (6G, 7A) in 25 Bundesliga games this season, and scored 5 times in the Europa League too.

As per the Bundesliga’s official website, Bailey’s key strengths are his ‘dribbling, vision, powerful shot and blistering pace’. He is a goal threat, he can cross and pass well, has excellent technique and is just about as well-suited to the counter-attack as you could possibly be.

There are question marks about his defensive contribution, but of course he does play in a league known for its intensity and pressing, and in a team that works very hard both in and out of possession.

Mateus Cardoso Lemos Martins – commonly known as Tetê – is the latest Brazilian attacking star that Shakhtar Donetsk have had in their ranks, and the latest that is beginning to turn heads.

The Brazil U23 international – who can also play on the left or as an attacking midfielder – has 31 goal contributions in 74 games (19G, 12A) since joining the Ukrainian side. After an eight-goal haul in the league last season, he has 4 goals and 2 assists in 18 games.

Tete drew the plaudits for a performance against Real Madrid in the Champions League earlier this season, after signing for €15m  from Gremio academy in early 2019 without making a single appearance for the senior team. He is quick, skilful, direct, has fantastic technique with the added flair you might expect given his origin.

The doubts are like the ones surrounding Hlozek in the sense that he is playing in a league that is not of the best quality so his tougher tests have been limited to the odd European game. Also, his consistency and defensive work rate are perhaps not of the level of other options on this list.

Finally, we round off the list with a player that has been repeatedly linked to Milan over the past few weeks and therefore seemingly represents a viable option.

Ikone has recently broken into the French national team thanks to his impressive exploits for Lille, who lead Ligue 1 and are having a fantastic season. He has 7 goals and 7 assists in 41 games across all competitions this term, with his skills firmly on display during their 3-0 Europa League group stage win at San Siro a few months ago.

Ikone is a player that actually likes to operate in more central areas as well as out wide, which makes him a real threat given how Les Dogues like to press and counter, just like Milan do. He is quick, powerful and direct but also has playmaker tendencies; building attacks and setting up team-mates thanks to his vision.

The criticisms of Ikone could be the fact that he is perhaps a bit raw and a bit inconsistent, something which sounds similar to the last forward Milan bought from Lille, but in terms of system and skill set, he represents a potential missing jigsaw piece. Good relations between Elliott and Lille could favour a negotiation, too.

🤔 What do you think? Did we get the assessments right? Tell us in the comments below! 👇