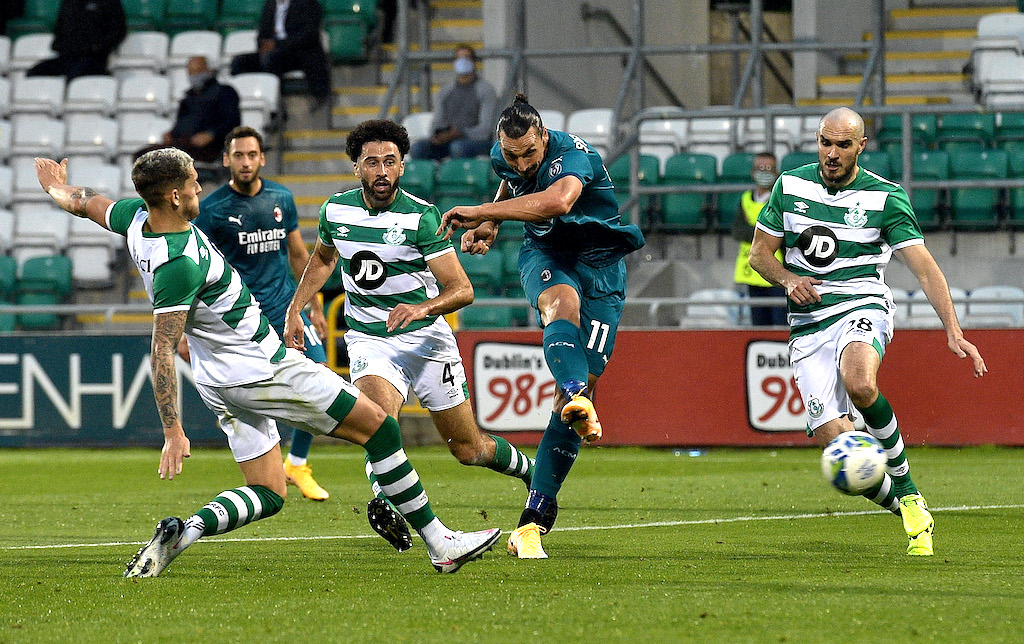 Last night, AC Milan kicked off the season against Shamrock Rovers in the Europa League qualifiers. The team managed to win 2-0, continuing their unbeaten run from last season.

While it wasn’t a flashy performance, the Rossoneri took the lead through Zlatan Ibrahimovic, who this cored his and the team’s first goal of the season. The game continued at a slow pace with Milan unable to add to their lead.

In the second half, Hakan Calhanoglu – who was having a great game – managed to score a lovely goal to send his team to the next round. We also saw Sandro Tonali and Brahim Diaz making their competitive debuts towards the end, with the latter showing glimpses of his skills in the limited time he had on the pitch.

The next test for Stefano Pioli and his men will be on Monday against Bologna in the opening fixture of Serie A. But first, let’s have a look at what we saw in the game against Shamrock Rovers.

The Swede was named in the starting eleven after having some muscle trouble during the pre-season. However, he looked in very good shape and involved himself a lot in the build-up, which is a good sign of his energy.

We also saw the chemistry between him and Calhanoglu once again, resulting in a few one-touch passes between the two before Ibrahimovic’s goal. Despite his age, the striker looks determined and hopefully, he will keep on scoring to help his side.

2. Problem on the flanks

With Ante Rebic and Rafael Leao missing from the squad, Milan played with Alexis Saelemaekers and Samu Castillejo on both flanks. Unfortunately, they failed to produce anything worth mentioning and they highlighted the problem that Milan has in terms of quality on the wings.

As the first mentioned duo will return to the squad shortly (Leao’s recovery time still unknown)the left-hand side won’t be a problem. However, reinforcement on the right is looking more and more like a necessity at this point.

Brahim Diaz made his debut with the Milan shirt last night and while he only came for a few minutes of playing time, we were able to get a glimpse of what he’s capable of. The Spaniard brought some flair and creativity to the squad straight away and looks set to have an impact on the Rossoneri’s season.

He’s mainly an attacking midfielder, currently operating as the backup for Calhanoglu, but Pioli could try him out on the right-wing where the team is struggling to produce as of now. Being two-footed, he will surely be of great value for the team.

Hakan Calhanoglu joined AC Milan in the summer of 2017. However, the Turkish international failed to live up to the expectations and excluding a few periods where he was consistent, he ultimately failed to showcase his capabilities. There are a lot of factors as to why that happened.

From the fact that he hadn’t played for months when Milan signed him, to the many different managers that played him in the wrong position. With Pioli, though, the No.10 has been simple amazing after the lockdown period and he started this season in the best way.

He got himself a goal and an assist last night, showcasing his finishing skills on the goal with a lovely effort. He was also named the MOTM in our post-game ratings . So is this the year for Calhanoglu to find consistency and proves the doubters wrong? Only time will tell, but it’s looking promising.

Davide Calabria continued the form from the pre-season as he once again was solid part of the defence last night. The Italian looks determined to prove to Pioli that he’s the man for the right-back position, after Andrea Conti was favoured in recent months.

The No.2 had a really positive season two years ago under Gennaro Gattuso and while last season was full of small injuries and inconsistency, his deputy Conti did little to impress.

Calabria, on the other hand, seems to have found his rhythm and he’s not looking to slow down. Hopefully, the youngster will find consistency and continue to improve.