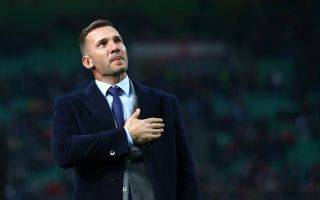 Former striker Andriy Shevchenko has spoken about his old club AC Milan at length, including what impresses him about the current team.

The Rossoneri are one of just three teams in Serie A to have won all three of their games to begin the season, having beaten Sampdoria 1-0 in the first round of the season, Cagliari 4-1 at San Siro before the international break and then Lazio 2-0 last night.

After a second-placed finish in the 2020-21 campaign and a good start to the new season, there is some hope that Pioli’s men can go one better and capture some silverware this season given the depth available to him.

Shevchenko spoke to La Gazzetta dello Sport about all things to do with the Rossoneri, having attended last night’s 2-0 win over Lazio, with his comments relayed by PianetaMilan.

On what struck him the most about Stefano Pioli’s Milan: “Being a lively team, with a great rhythm. A team that is pleasant to watch, plays easily and just as easily manages to build excellent actions. They play vertically, they alway tries to control, they have many solutions. I like them, they will be there until the end to try to win the Scudetto.”

On AC Milan’s main opponent in the title race: “Inter, who have changed a lot but remain competitive. And then Napoli, Roma, the usual Juventus. They started badly, but they always know how to get up. I see great balance: it will be even more beautiful for this.”

On Milan’s chances of passing the group in the Champions League: “The group is the toughest ever. It’s not a drama if they go out, it can never be considered a failure. But the team is competitive and has a chance to go through. And then let’s also see it from the opponents’ side: catching Milan from the fourth pot is unfortunate for them.”

On where Milan could go if they got through the Champions League group: “One step at a time. The group is ready for the top in the league, but the Champions League is different from everything. The enthusiasm of finding it after so many years will give a boost, anything can happen. Above all, it is in games of this depth that the players grow, increase in awareness, they feel stronger and stronger. It is a continuous circle: you play, gain experience, win, grow.”

On the state of Milan’s growth process: “Compared to the last few seasons they have already grown a lot. They play more convinced of their strength, they are aggressive, they press, they create. They transmit passion to those who follow them. Pioli has done a great job in the last two years, he regenerated the team. And Paolo Maldini was very good: the club made excellent signings.”

On Olivier Giroud, the new Milan centre-forward: “I like the mix between young and experienced players that has been created. Before, a symbol was missing and Zlatan Ibrahimovic is back. Giroud is someone who fights for the team, he will give a lot.”

On the possibility of Milan playing with the Ibra-Giroud pairing: “Of course yes! Pioli will find the best solution.”

On Ibrahimovic: “I know him, it’s the head that still makes him so competitive, the ambition of wanting to be decisive again. And he can be: not for 60 games, but in those in which he is there. And he will be decisive too in the locker room: he is a leader, he knows how to lead the youngest.”

On Brahim Díaz, AC Milan’s new number 10: “I like the way he moves between the lines. He’s quick, he receives the ball and turns quickly. He always aims forward.”

On who could be AC ​​Milan’s revelation of the season: “Sandro Tonali. He showed that he could be an important player, he has enormous growth margins ahead. He can become a great. Mike Maignan is also good: they didn’t win the Scudetto ahead of PSG by chance.”

On his own future: “I look around. There are some proposals to evaluate. In the meantime I see matches, I get information, I study. I will go to England, Spain, Germany. I will not stop here, we will see what will come.”

READ MORE: Defence has become one of Milan’s biggest strengths – the numbers show it