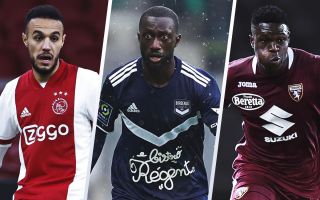 AC Milan will reportedly be in the market for a full-back in the upcoming transfer window, as the club considers Manchester United loanee Diogo Dalot too expensive to permanently sign.

Given the high level of play from Davide Calabria and Theo Hernandez, Milan’s management will seemingly look to bring in a bench option who can provide quality minutes in the event of an injury or suspension to either of the starters.

Interestingly, Paolo Maldini and the technical staff seem to prefer to bring in a full-back on a free transfer, which will greatly limit the quality of player available to the Rossoneri. The club will likely look for an experienced, reliable veteran who can stabilise the backline if called upon.

A quality option who is on an expiring contract is Napoli’s Elseid Hysaj. The 27-year-old defender is capable of playing both left and right-back and has plenty of high-level experience, playing in 221 domestic league matches for the Partenopei since 2015.

Hysaj is the epitome of a consistent, reliable full-back. The Albanian is an excellent distributor and combines well on the wing, looking to progress play towards the attacking third.
Like others on this list, Hysaj is not the most adept tackler, but he compensates for this weakness with his awareness and intelligent positioning and is rarely caught off-guard by counter-attacks.

Hysaj is one of two defenders on expiring contracts that Milan has been linked to in recent weeks and seems to be a realistic option. The Albanian international commands a reasonable wage and would immediately strengthen the depth of Stefano Pioli’s backline.

Another free transfer that Milan has been linked with is Danilo D’Ambrosio. The Serie A veteran has struggled to find playing time with the Scudetto winners this season, but he still offers quality defensive play and an attacking presence.

D’Ambrosio has mostly spent the last two seasons as the right-sided centre-back in Antonio Conte’s three-man backline, but he has occasionally been deployed as a wing-back. The 32-year-old can play every position on the backline, and would give the Rossoneri an incredibly versatile bench option. It is also possible he could push Davide Calabria for the starting right-back role.

Despite his age, D’Ambrosio has impressive pace and is unafraid to push the ball up the pitch, even from the centre-back position. He is a solid distributor and rarely loses possession or makes critical errors.

D’Ambrosio’s biggest weakness is his one-on-one defending; his tackling percentage is an atrocious 27.9%, and he allows far too many opposing dribblers to beat him on the wing. Given their tackling deficiencies, playing both D’Ambrosio and Theo Hernandez on the pitch simultaneously could leave Milan’s backline significantly exposed to creative players.

If D’Ambrosio signed with Milan, he would provide a consistent, experienced presence who at the very least can provide quality minutes. He would merit a high wage, but the Rossoneri could do much worse than adding the ten-year Serie A veteran.

Perhaps the most obvious, but also the most unattractive option is Andrea Conti. Milan’s starting right-back for much of 2019-20, Conti has been on-loan at Parma since the January transfer window.

Lingering injury problems have derailed Conti’s time at the Tardini; the defender has played in just eleven matches, starting nine. Furthermore, Parma have now been relegated and is no longer an option to permanently sign the Milan man.

Conti has experience playing wing-back and scored 8 goals with Atalanta in 2016-17, but has largely failed to duplicate this form, which saw him earn an international cap at the 2018 World Cup Qualifiers.

Though he lost his starting position to Calabria last season, Conti is an experienced, if uninspiring option whose return would bring consistency and an attacking presence to Milan’s backline. He would likely be left to compete with Pierre Kalulu for playing time should he rejoin the Rossoneri for a fifth season.

Bordeaux’s Youssouf Sabaly – in the midst of a renaissance season for the Girondins – is another veteran available for a free transfer. Experienced at left and right-back, Sabaly was linked with Napoli in 2018 and Fulham in 2019 and has 18 international appearances for Senegal.

Sabaly is very fast and technically skilled for an outside-back and often looks to drive the ball up the wing and play onrushing attackers through into space. Relative to other full-backs, the defender creates a high number of shot-creating and goal-creating actions.

The 28-year-old plays in a system very similar to Stefano Pioli’s 4-2-3-1 under Bordeaux coach Jean-Louis Gasse. The French manager employs the same formation with similar personnel, including an attacking-minded and a more defensive counterpart , according to Total Football Analysis.

Sabaly does struggle with technical defending and has low successful pressuring and tackling percentages. He would certainly see a decrease in playing time with the Rossoneri, but the Senegalese defender would be a quality bench player who could add an attacking spark when called upon.

Young star Wilfried Singo has seen his stock rise significantly this season after performing well for his struggling Torino side. The 20-year-old has been linked to both Milan and Liverpool in recent months and would require a hefty transfer fee.

Given his pace and creative abilities, Singo is best-suited to the wing-back position, but he has also played significant minutes as a traditional right-back under Torino manager Davide Nicola. He typically plays high and wide, stretching the field and looking to play in crosses to Andrea Belotti.

Defensively, the young Ivorian is average but improving, and has seen his successful pressures and tackles increase in recent months. Singo is dominant aerially, and, with his frame and pace, could develop into a quality, well-rounded defender, potentially even a centre-back.

As Torino reportedly rejected a sizeable transfer bid from Liverpool, Milan would likely need to spend in excess of £20 million to secure Singo’s services. He would be a terrific signing that would further improve the future of Milan’s backline, joining other young talents like Pierre Kalulu and Matteo Gabbia.

Perhaps the best full-back in the Eredivisie, Moroccan international Noussair Mazraoui is a name for the future. A product of Ajax’s renowned youth academy, the right-back has been a key defensive player for his side and impressed against Liverpool and Atalanta in the Champions League this season.

Due to Ajax’s dominance over their domestic competition, Mazraoui plays high up the pitch, often overlapping or combining with the right winger. He is an important component of build-up play in the channels and is also able to drift inside and look to shoot.

Mazraoui is rarely caught out of position and has the pace to deal with counter-attacks. The 23-year-old is a phenomenal one-on-one defender and understands the defence’s spacing, allowing him to frequently block shots and intercept passes.

One of the biggest concerns about Mazraoui is his aerial ability. He often struggles to win headers or clear crosses, which can lead to dangerous chances in the defensive third. It is also unclear as to how he would adjust to the defensive 3-5-2s that lots of other teams play in Serie A, whereas he mostly sees the classic Dutch 4-3-3 in the Eredivisie.

The Rossoneri would have to pay a significant transfer fee for Mazraoui, who is under contract with Ajax until 2022. The Moroccan may not be a perfect fit for Paolo Maldini’s master plan, but he certainly has the potential to push for a starting position and at a minimum play significant minutes for Milan.

*All stats courtesy of FBref.com

READ MORE: Curva Sud chants to be broadcasted by speakers during Milan-Cagliari warm-ups