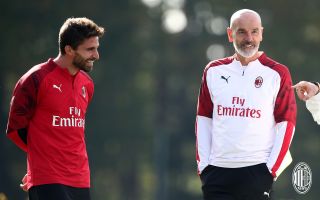 This afternoon, AC Milan will celebrate 120 years of existence by taking on Sassuolo at the San Siro. After two important wins, they will be looking to add a third, gaining as much confidence as possible ahead of the Atalanta clash.

Just before his press conference started yesterday, Stefano Pioli revealed his 23-man squad for the game. Mattia Caldara is back at the manager’s disposal after recovering from his ACL tear, potentially making his Serie A debut for Milan today (off the bench).

However, Fabio Borini was excluded from the list, and no particular reason was given by the club. As reported by Sky Italia (via MilanNews24.com), the winger isn’t in the plans of the Rossoneri, who are already evaluating a sale in January.

Therefore, with the inclusion of Caldara, Borini was excluded instead. Today’s edition of Tuttosport (via MilanNews.it) backs up the news, stating that the decision purely technical by the manager.