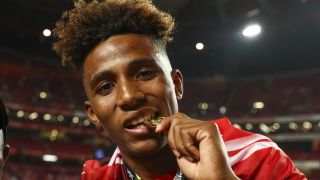 Chelsea have made a huge offer in an attempt to beat AC Milan, Manchester United and West Ham in the race for Gedson Fernandes, a report claims.

According to Sky Sports, the Blues have submitted an offer of an 18-month loan with an obligation to buy for £55m (€65m) which would become active if he plays in at least half of their games during his loan.

The English outlet adds that West Ham United’s current offer is an 18-month loan with an obligation to buy for £33m (€39m), and that the decision will rest with Benfica and the player.

Sky reported last Thursday that Benfica are listening to offers for the 20-year-old, valued at €40m, with Lyon and Milan having ‘made formal offers’ for the player, while Everton and Manchester United have also been linked.

Meanwhile, Tuttosport reported earlier today that Milan midfielder Franck Kessie is still attracting interest from West Ham, but that they too have made Fernandes their priority.