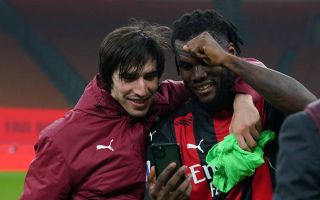 Sky: Clues emerge regarding line-up against Lazio including double pivot and centre-forward

With Sunday’s crucial game against Lazio approaching fast, some clues have emerged from training as to what the starting line-up will be.

According to Sky Italia (via MilanNews), Milan trained this morning at Milanello and – in the training games ahead of Sunday’s match against Lazio – head coach Stefano Pioli tried Sandro Tonali and Franck Kessie in the middle of the field as the double pivot.

With the Ivorian back fit and Ismael Bennacer having not started the first two league games due to not being at his best condition, it seems that Tonali will get the nod to keep his spot and partner Kessie.

In attack, however, the Rossoneri coach gave little away. He alternated Zlatan Ibrahimovic and Ante Rebic as the centre-forward, which means that the decision on who will start could very well come tomorrow or even on the day of the game itself.