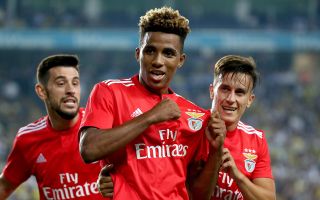 Benfica midfielder Gedson Fernandes is set to seal a move to Premier League side Tottenham on Monday despite links with AC Milan, a report claims.

The Rossoneri have been linked with a move for the 20-year-old since the summer, and Sky recently claimed that Benfica are listening to offers for the 21-year-old, valued at €40m.

They added that official bids had arrived from both Lyon and Milan, while Everton and Manchester United have also been linked, as have their Premier League rivals Chelsea and West Ham.

According to Sky Sports in the UK though, it is in fact Jose Mourinho who is set to welcome his compatriot to north London as Spurs have agreed a deal for Fernandes.

The outlet claims that the youngster is expected to fly into London in the next 48 hours to finalise the deal having chosen Tottenham over other interested clubs due to Mourinho’s presence.

Terms of the agreement between the two clubs are still being finalised while the contract is not expected to present a problem.