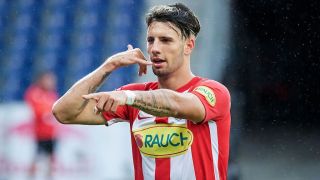 AC Milan, Arsenal, Real Madrid and all the other clubs circling for Red Bull Salzburg star Dominik Szoboszlai look set to be disappointed.

However, he added that they are not the only side interested as LaLiga giants Real Madrid and Atletico Madrid are also keen, as are Premier League rivals Arsenal and Tottenham as well as Milan.

According to Sky Germany, Szoboszlai has decided to sign for RB Leipzig in the January transfer window. All that is missing is the signature and the very final details.

Salzburg’s sports director Christoph Freund was in Leipzig this week to negotiate the deal, they add, while all parties want to officially announce the transfer before Christmas.

The 20-year-old has a release clause of €25m in his contract with Salzburg, and Leipzig have beaten the likes of Arsenal, Real Madrid and Bayern Munich to his signature.