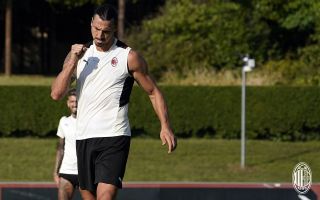 Sky: Ibrahimovic celebrated birthday early to be with his Milan teammates

Zlatan Ibrahimovic will turn 40 tomorrow. Although it has become pretty clear that his body isn’t always with him these days, it’s still very inspiring to see a man at his age perform on such a high level.

According to Sky Italia, as cited by MilanNews, the striker decided to have his birthday celebrations yesterday so that all of his Milan teammates could feature. Tomorrow, they will be busy with the game against Atalanta, so it was the only day available.

Ibrahimovic wanted to give a toast to all of his teammates, which is why they decide to celebrate yesterday. We can expect that the Swede gave some inspiring words ahead of what will be an important game against Atalanta.

The Rossoneri have done quite well without their big leader but, on the other hand, Ibrahimovic has always been present at the games. As we saw recently, he acted almost like a second coach from the players’ section at San Siro.