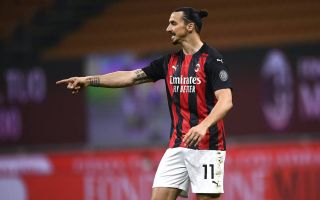 Sky: Ibrahimovic especially fired up for Juventus match – “It gives him something more”

There is one Milan player in particular who seems fired up to face Juventus on Sunday, and there is no surprise that it is Zlatan Ibrahimovic.

Milan head into the game against Juve with the fate of their season hanging in the balance. A win against Benevento on Saturday certainly helped, as did Atalanta and Napoli dropping valuable points, but the feeling is that the Rossoneri may need to win three of their last four to be in good shape for a top four finish.

Given that Juve are now level on points with Stefano Pioli’s men but have a better head-to-head record, Sunday’s game at the Allianz Stadium takes on even more significance, and one man who knows it is Ibrahimovic.

According to what correspondent Manuele Baiocchini told Sky Italia (via MilanNews), Ibrahimovic is ‘really excited’ for the game in Turin as he didn’t score against Benevento. Games against Juventus are ones that he feels more in particular, given he played there and scored a lot.

“Doing it in such an important match, because it’s a clash for the Champions League, it gives him something more certainly. And we are sure that he will prepare it in a very particular way,” Baiocchini added.

GdS: No doubts regarding future of Man Utd defender – he will join Milan this summer
1 August 2021, 17:51
Serie A Standings