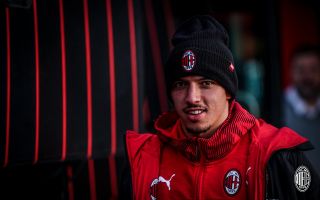 The AC Milan squad found themselves in a particularly chaotic and unique situation on Tuesday evening in Turin, one journalist has revealed.

It was officially confirmed late yesterday that the Coppa Italia semi-final second leg between Juventus and AC Milan at the Allianz Stadium – scheduled for Wednesday at 20:45 – would be postponed to a later date by order of the Prefect of Piedmont due to the coronavirus outbreak.

Manuele Baiocchini revealed the details of how the evening panned out for the Milan squad, as they had already posted on social media to say they had left via bus for Turin.

He confirms (via MilanNews) that the squad left Milanello at 6pm and arrived in Turin at 8pm. When they arrived at the Hotel, the first rumours of the possibility of the postponement of the game began to surface, but both the management and the journalists were unclear about the situation.

Milan then stopped for dinner at the hotel and then the communication of the official postponement came at 9.15pm. The players then got back on the bus but they did not leave until 9.30pm because there was still no certainty that the game could not actually be played.

They were blocked for several minutes on the bus because the final decision did not arrive, but it finally arrived at 10.38pm and the bus then departed. Head coach Stefano Pioli has given the team the day off as a result.