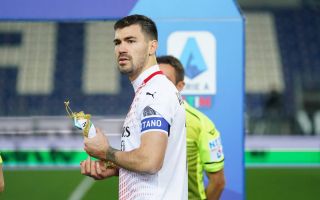 Sky journalist reveals why Tomori is set to sit out vs. Udinese and declares ‘it is right’ the Romagnoli plays

Sky Italia journalist Stefano De Grandis has confirmed that Alessio Romagnoli is set to start against Udinese, adding that ‘it is right’ in his opinion.

Pioli chose to give Romagnoli a break and to put Tomori in against Roma, and the Englishman repaid the trust of his coach with a a very solid performance, which now prompts a new dilemma.

The media have documented well how keeping Romagnoli out of the starting XI was not at all easy because of the strong message it sends, but now it will be even more complicated to give him a permanent position given Tomori’s performance.

Speaking to Sky Italia (via MilanNews), Stefano De Grandis spoke about Romagnoli and confirmed the news that Romagnoli is set for another start.

“It is right for Romagnoli to play, both because Tomori is a bit tired and because it is the demonstration of an alternation with a young and strong player. Romagnoli is the captain of Milan and it is right that he plays,” he said.

In the coming weeks Milan will play every three days and therefore Pioli will have to be good at rotating his players so as to always have fresh legs on the pitch.