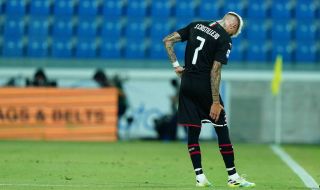 Sky: Latest of the conditions of Castillejo and Theo Hernandez – MRI scan scheduled

AC Milan winger Samu Castillejo is set to undergo an MRI scan after he limped off early on during the Rossoneri’s 2-2 draw against SPAL.

Despite having all the early play in the game was the home side who took the lead. A corner came into the box and was not well dealt with, allowing Bryan Dabo to square to former Milan Primavera player Mattia Valoti, who bundled the ball home from the six-yard line.

According to Sky Italia (via MilanNews), Castillejo will undergo an MRI scan on Thursday to clarify the extent of the injury and the recovery time, though he will almost certainly miss Saturday’s crucial game against Lazio.

Theo Hernandez also went off midway through the second half but his condition is not worrying: the Frenchman has already recovered from a contusion to the tibia and looks set to be fit to face the Aquile.