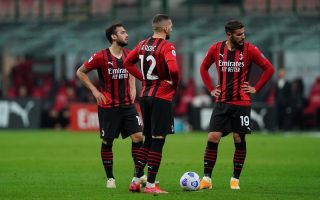 Sky: Latest on Rebic, Theo Hernandez and Brahim Diaz ahead of Bologna trip

An update has arrived on the status of Ante Rebic after he sustained an injury in Saturday night’s win over Hellas Verona and missed the defeat to Porto.

Rebic, Mike Maignan, Theo Hernandez, Brahim Diaz, Alessandro Florenzi and the disqualified Franck Kessie all missed the game last night as the Rossoneri suffered a 1-0 defeat that might just end their hopes of going further than the group stages in the Champions League.

According to what Manuele Baiocchini has told Sky (via PianetaMilan) correspondent at Casa Milan, the uncertainty remains regarding the Covid-positive duo Theo Hernandez and Brahim Diaz as it is impossible to predict when they will test negative.

It is a different story for Rebic, who will have to undergo further tests and who could return to training with the rest of the squad as early as tomorrow. His condition will be evaluated day by day and he will of course not be rushed, but having him back for the weekend would be a big boost.