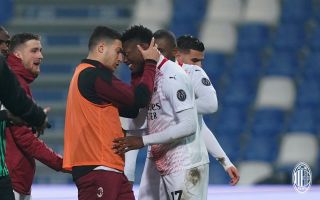 Sky: Leao, Rebic, Theo, Calhanoglu and Kjaer to start vs. Red Star as Pioli sticks with 4-2-3-1

AC Milan will stick with their usual formation for the time being and will start Rafael Leao tomorrow night against Red Star, a report claims.

Peppe Di Stefano spoke to Sky Italia (via MilanNews) from Milanello about the latest preparations ahead of the second leg against Red Star. He confirmed that Leao will play as the striker while Zlatan Ibrahimovic will start from the bench.

He added that Milan have the desire and the obligation to get up so as not to detract from the good things that have been done in 2020. They will go on with 4-2-3-1 formation despite rumours suggesting otherwise.

The entire management is currently at Milanello and there will be a final training session tomorrow before the game. Simon Kjaer and Theo Hernandez will both start, with Hakan Calhanoglu and Ante Rebic also getting the nod. Those are the four guaranteed of starting the game at the moment.