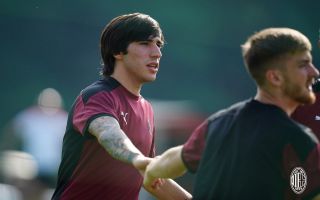 Sky: Milan provided Tonali with a personal trainer to prepare him for training

Sandro Tonali took part in his first training session as a Milan player earlier today, fulfilling his childhood dream after signing the contract last night. Now the Rossoneri are hoping to have him ready as soon a possible.

According to Manuele Baiocchini of Sky Italia, as cited by MilanNews.it, Milan provided the 20-year-old with an athletic trainer as soon as an agreement was reached with Brescia. That way, they were able to prepare him for the upcoming training.

Tonali is expected to feature in the Rossoneri’s friendly game against Brescia on Saturday, which will be an important clash for him emotionally. Making his debut for the club he leaves, although not official, against the club he just left.

The midfielder will wear the No.8 shirt and it remains to be seen when he will earn himself starting spot, as Milan are expected to start the season with Ismael Bennacer and Franck Kessie in midfield. His time will come, though, that’s for sure.