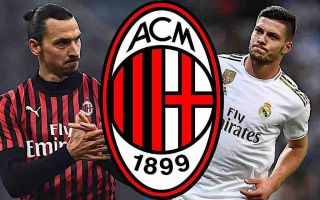 With the future of head coach Stefano Pioli secured, Milan are now looking ahead to possible transfers for next season.

According to what was reported by Sky Italia on Wednesday night (via MilanNews), the Rossoneri management have opened up to the idea of giving a new deal to striker Zlatan Ibrahimovic.

In fact, they report that the club want to keep the 38-year-old and will soon meet him to submit their offer. The summit with Raiola for the renewal of Gigio Donnarumma is also imminent.

In the meeting that took place on Wednesday with Fali Ramadani, Rebic’s agent, Luka Jovic was also brought up in conversation.

Real Madrid have not yet decided if he wants to sell the Serbia international, let alone allow him to depart on loan. In addition, at the moment Los Merengues value the Serbian practically the same amount that was paid last year, that is €60million.